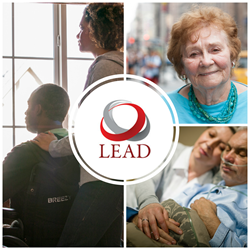 Fortunately, Congress has the responsibility and authority to protect and promote our national well-being through the federal appropriations process. Key congressional champions have recognized the threat that Alzheimer’s poses to our society and economy.

The Leaders Engaged on Alzheimer’s Disease Coalition (LEAD Coalition) stands with all Americans facing life-altering and fatal diseases in opposition to the President’s Fiscal Year 2018 Federal Budget Blueprint. The proposed budget makes shortsighted decisions that would eviscerate care, services, and hope for the most vulnerable among us.

The proposed budget would cut $15.1 billion from the Department of Health and Human Services, including nearly $6 billion in slashed funding at the National Institutes of Health (NIH). Currently, NIH has less than half the $2 billion annual funding needed to make headway against the national goal of preventing or effectively treating Alzheimer’s disease by 2025. The President’s budget blueprint threatens to make a challenging situation hopeless for millions of Americans facing Alzheimer’s disease. Stripping NIH of urgently needed research dollars will undo decades of work for scientists, researchers, medical professionals, patients, and families who have made efforts to overcome life-altering diseases like dementia.

Other sections of the President’s proposed budget undermine and weaken the very institutions that would accelerate innovative science, tools, and supports for people in need.

In total, these proposed cuts directly undermine the President’s public commitments to strengthen the health care system for future generations. Alzheimer’s is driving health care costs at an unsustainable rate precisely because underfunding of science has delayed breakthroughs in preventing or treating the disease. Today, more than 5 million Americans have dementia and another 15 million Americans are caregivers for people with dementia, resulting in an annual cost to our economy of $259 billion. Without scientific breakthroughs, dementia will cost our society more than $1 trillion dollars annually by 2050.

Fortunately, Congress has the responsibility and authority to protect and promote our national well-being through the federal appropriations process. Key congressional champions have recognized the threat that Alzheimer’s poses to our society and economy and they are ready to act.

We call upon these congressional leaders to move forward with the bipartisan commitment to fund the fight against Alzheimer’s disease and other forms of dementia. The LEAD Coalition has sent letters to the chairs and ranking members of the full Appropriations committees and two relevant subcommittees in the U.S. House and Senate signed by over 125 leading researchers and organizations committed to overcoming Alzheimer’s, urging members of Congress to strengthen NIH, to support the FDA, and to continue to prioritize dementia care and services programs in the Fiscal Year 2018 Federal Budget. Congress must face the challenge head-on, equipping the scientific community with needed resources to overcome this disease.

Leaders Engaged on Alzheimer’s Disease (LEAD Coalition) is a diverse and growing national coalition of more than 90 member organizations committed to overcoming Alzheimer’s disease and related dementias, including vascular disease, Lewy body dementia and frontotemporal degeneration. The coalition works collaboratively to focus the nation’s attention on dementia and to accelerate transformational progress in: (1) care and support to enrich the quality of life of those with dementia and their caregivers; (2) detection and diagnosis; and (3) research leading to prevention, effective treatment, and eventual cures.

Congressional Letter on the Federal 2018 Budget