Laurie Robert of NRB Inc. is the Modular Building Institute's 2017 Hall of Fame Award Inductee. This prestigious award was presented to Laurie for her amazing dedication to the modular construction industry. 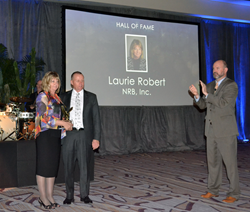 Laurie Robert is presented with the MBI Hall of Fame Award by Bob McNeil, President of NRB Inc. Congratulating Laurie is Tom Hardiman, Executive Director of the Modular Building Institute.

Laurie Robert has shown amazing dedication to the modular construction industry through her commitment to the Modular Building Institute and her overall presence in the modular community.

The MBI “Hall of Fame” recognizes the contributions of those whose careers are or were dedicated to the modular industry or whose acts have had a significant impact on the careers of all others involved.

On Monday, March 21st, 2017 Laurie Robert, VP of Sales and Marketing with NRB Inc. was inducted into the MBI’s Hall of Fame. The induction took place during the World of Modular – Award Gala in Tucson, Arizona.

“Laurie Robert has shown amazing dedication to the modular construction industry through her commitment to the Modular Building Institute and her overall presence in the modular community”. Bob McNeil, President NRB Inc.

Laurie began her career in the modular building industry in 1980 and joined NRB in 1982 as Sales Manager. During the first few years with NRB, Laurie built up a sales department with staff and resources and established new dealer distribution channels for some product lines in Canada and the US. Laurie explored other potential modular applications and opportunities and engaged a marketing company to revisit the brand, media and message.

Laurie became a director and VP of Sales and Marketing for NRB in 1992 and began to look even more closely at what the industry in general was doing across North America. In 1995 NRB rejoined the MBI. Laurie began attending smaller regional meetings east of the Mississippi to meet and collaborate with industry leaders and to get a better understanding of where the industry was headed and thus, what NRB’s future role and opportunities might also be. In 1997 Laurie was asked to join the MBI board.

Laurie was elected President of the MBI Board of Directors in 2001, marking two ‘firsts’ for the organization; MBI’s first female President and the first Canadian President!

Laurie was also the first chair of the Modular Building Institute Canadian Foundation and she remains a trustee of this board today.

Currently, Laurie serves on the executive of the Board of Directors of the National Building Institute of Building Sciences Off-Site Construction Council in Washington DC.

Laurie continues as Vice President of Sales and Marketing with NRB Inc. in Grimsby, ON and NRB, USA Inc. in New Holland, PA. As a key member of the NRB management team, Laurie continues to keep NRB focused on the advancement of permanent modular construction.

“NRB, MBI and the Modular Industry have all benefited from Laurie’s leadership and involvement”. Bob McNeil.