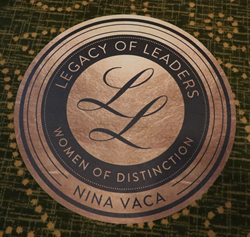 Women entrepreneurs are one of America’s most powerful forces of economic growth. Contributing to America’s business success, women run over 11.4 million businesses with thousands more starting every week. Championing these businesses is the Women's Business Enterprise National Council (WBENC), the largest organization for women-owned businesses in America. With a twenty-year track record of development and success, WBENC is considered America’s most effective and respected advocate for Women’s Business Enterprises (WBEs).

In celebration of its 20th anniversary, WBENC is launching the highly-anticipated Women of Distinction Program. The Women of Distinction Program has been created to recognize an elite group of women leading WBEs, during WBENC’s annual Summit & Salute. These women have demonstrated a deep commitment to WBENC and to breaking down barriers for WBEs across America. A long-time supporter of WBENC and a vocal advocate for women in business, Pinnacle Group Chairman and CEO Nina Vaca has been named to the inaugural class of 25 outstanding women. In her role as a WBENC Woman of Distinction, Vaca will serve as a strategic advisor to WBENC, supporting the growth and success of all WBEs.

“As we celebrate our 20th Anniversary, we are so proud of the inaugural group of Women of Distinction, including Nina Vaca, for her leadership and commitment to our organization and the women’s business community,” says WBENC President and CEO Pamela Prince-Eason. “The Women of Distinction program allows leaders like Vaca to give back to a community they feel passionate about, while playing a key mentorship role.”

“I am honored to be named alongside this powerful group of WBE champions,” says Vaca.  “Pinnacle Group is a living example of what happens when women are empowered to achieve without limits.  Holding key leadership roles and making up over 60% of our corporate workforce, we are women-led and women-fueled.  For over a decade, we’ve been ranked among the fastest-growing companies in America, and we have valued our partnership with WBENC at every step along the way.  We are delighted to invest in the future of WBENC and do our part to support other women-led companies on their path to greatness.”

Nina Vaca is one of the country’s most celebrated entrepreneurs.  She has been an Ernst & Young Entrepreneur of the Year, an NBC Innovator, and a Goldman Sachs Most Intriguing Entrepreneur.  For the past nine years she has been named one of the 101 Most Influential Latinos in America.  During her 20 years as Chairman and CEO of Pinnacle Group it has grown explosively, and it was named the 2015 fastest growing women-owned business in America.  Vaca is also a committed civic leader dedicated to helping build businesses and communities globally.  As a White House appointed Presidential Ambassador for Global Entrepreneurship, she travels the globe sharing her story and inspiring the next generation of entrepreneurs.  Vaca is also Chairman Emeritus of the United States Hispanic Chamber of Commerce and serves as Chairman of its Foundation, which houses At the Table, an initiative she founded to advance women in business and leadership. For more information, please visit http://www.ninavaca.com

Pinnacle Group is a leading provider of information technology services and workforce solutions. Founded in 1996, Pinnacle Group includes Pinnacle Technical Resources, Inc., its flagship information technology services company serving the Fortune 500.  Named the Fastest Growing Women-Owned/Led Company in the U.S. by the Women President's Organization in 2015, Pinnacle Group has become one of the largest providers in its industry with thousands of IT professionals providing services across the U.S. and Canada. For more information, please visit http://www.pinnacle1.com

Founded in 1997, WBENC is the leading third-party certifier of businesses owned and operated by women, with over 13,000 WBENC-Certified WBEs. WBENC-Certification is accepted by more than 1,000 corporations representing America's most prestigious brands, in addition to many states, cities and other entities. Throughout the year, WBENC and its 14 Regional Partner Organizations provide opportunities for interactions between more than 650 member corporations, government agencies and thousands of certified WBEs at business building events and other forums. WBENC is a 501(c)(3) nonprofit organization that seeks and accepts donations from corporations, foundations and individuals that support its mission and programs. For more information, please go to http://www.wbenc.org