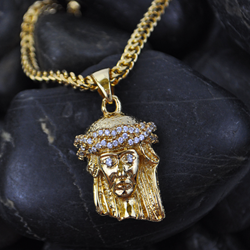 Creativity is what drives us, and we’ve been very fortunate to have been able to build a successful business on our passion

The Gold Gods, a street culture jewelry and accessories brand from Kansas City, Missouri, has quickly become the top retail-selling urban jewelry brand in the US, sold in more than 800 stores in North America and online worldwide.

Officially making its debut in February 2014, The Gold Gods was conceived by, then University of Missouri college student, Cam Love. Beginning with four unique gold necklace designs, Love launched an online store in November 2013. Two months later, in February 2014, the product line was selected by the leading lifestyle brand retailer Zumiez for a test trial in select stores. By the end of 2014, The Gold Gods became the only urban jewelry brand distributed and sold in all 600+ Zumiez stores throughout North America.

Over the next two years, The Gold Gods would experience exponential growth, expanding its product offerings to include rings, hats, belts and sunglasses, amassing $10M in sales. In addition to its core products, the lifestyle brand produced collaborations with music artists such as French Montana and Tyga, as well as with Grizzly Griptape founded by pro skateboarder Torey Pudwell. In June 2016, Love opened The Gold Gods flagship store on Fairfax Ave in Los Angeles alongside iconic street culture brands such as Supreme and The Hundreds.

In Spring 2017, The Gold Gods will be announcing an integrated partnership with a major music group currently topping the rap/hip-hop music charts. In addition, the urban lifestyle brand has plans to extend its experiential engagement to include pop up stores, virtual reality, and more.

“As we continue to grow Gold Gods into a world-class brand, our core commitment will always be innovation, design and quality because it’s the foundation of what we’ve built,” says Cam Love, Creative Director and founder of The Gold Gods. “Creativity is what drives us, and we’ve been very fortunate to have been able to build a successful business on our passion.”

For more information about The Gold Gods, please visit http://www.thegoldgods.com; for an interview with The Gold Gods founder Cam Love, please email rngotran(at)initiate-inc(dot)com.

ABOUT THE GOLD GODS
The Gold Gods (http://www.thegoldgods.com) is a leading jewelry and accessories brand tailored towards the urban street culture lifestyle. Founded in 2013 in Kansas City, MO, the lifestyle brand combines unique designs with quality craftsmanship to deliver premium trendsetting products. The Gold Gods is the top retail-selling urban jewelry line in North America distributed in more than 800 stores, as well as online worldwide.