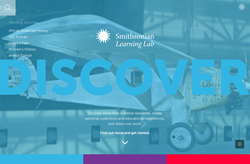 The Smithsonian announced today its joint effort with Lenovo to foster STEAM (science, technology, engineering, art and math) learning in school and after-school programs using the Smithsonian Learning Lab, a free online toolkit to find, customize and share digital museum resources with others. Lenovo is a leading provider of innovative consumer, commercial and enterprise technology.

Lenovo is funding the development of six STEAM activities that combine resources in the Smithsonian Learning Lab with hands-on projects for educators and Lenovo employee volunteers to facilitate with students. The Smithsonian Center for Learning and Digital Access is designing the activities and a step-by-step facilitator’s guide to accompany each one to support implementation in the classroom and after-school programs. The center will also create two virtual-reality education experiences for teachers to embed into their curriculum.

The North Carolina events follow a successful pilot earlier this year in which the center and Lenovo hosted a STEAM workshop featuring the Smithsonian Learning Lab for students served by the Marjorie S. Fisher Boys & Girls Club of West Palm Beach County in Florida, in partnership with the Boys & Girls Clubs of America.

The STEAM activities and facilitators’ guides are available in the Smithsonian Learning Lab for anyone interested in replicating or adapting the lessons in their own school or in an after-school program.

Since its founding in 1846, the Smithsonian Institution has been committed to inspiring generations through knowledge and discovery. The Smithsonian is the world’s largest museum, education and research complex, consisting of 19 museums, the National Zoological Park and nine research facilities. There are 6,500 Smithsonian employees and 6,300 volunteers. There were 30 million visits to the Smithsonian in 2016. The total number of objects, works of art and specimens at the Smithsonian is estimated at 154 million, including more than 145 million specimens and artifacts at the National Museum of Natural History. http://www.smithsonian.org
# # #