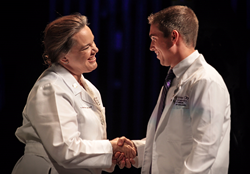 "I had to use a wheelchair, I had to learn everything again; it was such a strain just to put a puzzle together.”

The Brain Injury Association of America recognizes March as Brain Injury Awareness Month, a time that hits close to home for one KCU medical student. It’s also a time to raise awareness about the 2.4 million children and adults in the U.S. who sustain a traumatic brain injury each year, along with another 795,000 who suffer an acquired brain injury from non-traumatic causes.

For Landon Sowell, a first-year medical student at Kansas City University of Medicine and Biosciences (KCU), it’s a time to reflect on his own medical miracle and his dream of offering hope to someone else.

When he was 7 years old, Sowell suffered a kick to the head while feeding horses near Fulton, Kentucky. The horse’s hoof struck him just behind his right ear. The first grader was rushed to a local emergency room and immediately transferred to Vanderbilt Children’s Hospital in Nashville, Tennessee, with a fractured skull, brain swelling and bleeding in his brain.

“He looked like he had been in a boxing match with all the swelling,” said his mother DeAnna Reams. “He was unresponsive and did not look like my sweet, vibrant little boy.”

Sowell survived the injury, but the medical team prepared his family for the possibility that he might never be that vibrant little boy they once knew; that he might have suffered permanent physical injury and learning disabilities. “The doctors weren’t sure if I would make it to 20 years old and be fully functional,” said Sowell.

In the beginning, he couldn’t stand, walk or coordinate his arms and hands well enough to catch a ball. He couldn’t repeat a sequence of words to test his speech, and the kick was so forceful that he was left with impaired vision and crossed eyes.

“I woke up in a neck brace,” Sowell remembered. “I couldn’t move my arms or legs or speak. I had to use a wheelchair, I had to learn everything again; it was such a strain just to put a puzzle together.”

Much to the surprise and delight of his family and medical team, Sowell slowly gained back the ground he had lost. Following a year of intense physical therapy and surgery to correct his eyes, Sowell regained physical function and cognitive ability. He wasn’t allowed to play sports out of concern that he could sustain a concussion or suffer seizures, but he excelled academically in high school and college. Inspired by the physicians who treated him, Sowell decided to go into medicine. In August of 2016, he began medical school at KCU.

“This is truly an amazing story,” said CenterPoint Medical Center’s David D. Dyke Jr., DO, an internationally renowned concussion expert and president of the Brain Injury Association of Missouri. “It is rare to have moderate to severe brain injury and still make it into medical school.”

Dyke says the brain remains a mystery on many levels, but there is more interest in studying the brain and brain injuries. “We are just scratching the surface, even though our knowledge has increased dramatically over the past 10 years.”

Dyke believes Landon’s young age at the time of his injury had an impact on the ability of his brain to heal, but notes the importance of focusing on brain injury prevention, especially in adolescents.
Sowell wants to use what he calls his “second chance” in life to provide not only medical care, but also hope to kids and parents who show up in the ER with injuries similar to his. “I want to make a difference,” he said. “If a little kid comes into the ER and I see them in the condition I was in, I want to demonstrate that recovery is possible.”

Sowell credits his confidence in achieving his goal of becoming a doctor to his Christian faith and his ability overcome profound physical challenges.

His near-death encounter as a child puts life into perspective even today. “My mom says it kicked common sense into me,” he said with a smile. “That experience proves there is nothing so bad that can ruin your day, nothing so bad you can’t get over, and always look for the most positive thing, no matter what it is.”