Great Basin Brewing Co., headquartered in Sparks, Nev. and the University of Bonn in Germany have teamed up in a rare partnership in the name of the Ichthyosaur. 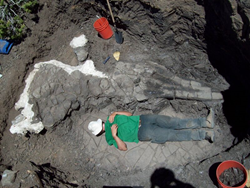 Ichthyosaurs, Nevada’s official state fossil, represented the first large predators after a major extinction of most species some 250 million years ago.

“Nevada is one of the most important localities to understand how Ichthyosaurs helped create and survive in the ancient ecosystem. It was only fitting to name one of our brews after this most important reptile.”

Great Basin Brewing Co., headquartered in Sparks, Nev. and the University of Bonn in Germany have teamed up in a rare partnership in the name of the Ichthyosaur.

While sometimes confused with dinosaurs, Ichthyosaurs were true reptiles of a different lineage. Ichthyosaurs, Nevada’s official state fossil, represented the first large predators after a major extinction of most species some 250 million years ago. Fossils of various species of these evolving creatures have been found all over the world.

Students and professors from the Division of Paleontology, Steinmann Institute of the University of Bonn, led by Dr. P. Martin Sander, professor of vertebrae paleontology, will be combing the Augusta Mountains in central Nevada this summer to further the understanding of the ancient Triassic ocean environment.

The team from the University of Bonn has currently identified at least 12 different species of Ichthyosaurs in the Augusta Range from previous expeditions. During the last field season, the team uncovered a huge creature, a species completely new to science, projected to have been about 50 feet long – and could well turn out to be the first large predator ever discovered in the fossil record worldwide.

Tom Young, owner and brewmaster of Great Basin Brewing Co. and former geologist, has always been somewhat of a science nerd. His bestseller is the Ichthyosaur India Pale Ale®. This aromatic IPA is wonderfully full bodied and smooth with a blast of grapefruit, spice and pine at the finish, and the result of a blend of carefully selected hops. Most call it “Icky” for short. Great Basin Brewing Co. has produced more than 6 million bottles at their Taps & Tanks location alone, making it the most widely consumed Nevada-made craft beer in the State of Nevada.

“Nevada is one of the most important localities to understand how Ichthyosaurs helped create and survive in the ancient ecosystem,” said Young. “It was only fitting to name one of our brews after this most important reptile.”

For 10 years, Great Basin Brewing Co. has offered assistance to further the Augusta Mountains expedition in a couple of ways. In addition to cash donations, last field season, the expedition crew had difficulty locating a truck to travel onto the back roads of Nevada to transport these newly uncovered reptile fossils to the Natural History Museum of Los Angeles County. Members of the Great Basin Brewing Co. team drove its beer truck, with a large Ichthyosaur fossil graphic on it, into the desert and delivered the fossils to the museum in Los Angeles. To date, Great Basin Brewing Co. has donated more than $11,000 towards funding this research.

Great Basin Brewing Co. is proud to host its inaugural Ichthyosaur Expedition Party, a fundraiser to assist the upcoming field expedition with Dr. Sander and his University team. This year’s event takes place at Great Basin Brewing Co,’s production brewery on April 7th and includes a keynote by Dr. Sander and the release of the first of four barrel-aged commemorative beers honoring some of the species of Ichthyosaurs – a barrel-aged, dry-hopped IPA named Phalarodon. Games, including team “pin the tail” on a 50-foot Ichthyosaur and a prehistoric creature spelling bee, food and of course, beer, will be part of the event.

“I absolutely relish working with Great Basin Brewing Co. not only because of the sponsorship aspect but because it is such a wonderful and ingenious way to make people aware of paleontological research,” said Dr. Sander. “I feel that with the Icky beer label you can reach out and pique the curiosity of people who otherwise might not be aware of the scientific treasures to be found in the Nevada mountain ranges.”

The largest specimens of Ichthyosaur have been found near Gabbs, Nev. and are preserved and viewable at the Berlin-Ichthyosaur State Park. These specimens are reported to have died about 225 million years ago and reached lengths of up to 60 feet. During the Triassic Period, Nevada and California were a part of a vast ocean, and did not exist as a landmass. At that time, Pangaea was a supercontinent where all of the present continents were connected surrounded by a vast ocean. Prior to the breakup of Pangaea, some 175 million years ago, both land and sea life evolved.

Along with Great Basin Brewing Co., sponsors of this expedition include; The University of Bonn, DFG German Research Foundation, the Natural History Museum of Los Angeles County and the National Geographic Society.

About Great Basin Brewing Co.
Since 1993, Tom Young and his wife Bonda have run a successful restaurant and brewery, now the oldest and most award-winning brewery in Nevada. Great Basin Brewing Co. has become the local place to go for great beer, great food and a great time. To help with the rising demand of local craft beer, Great Basin Brewing Co. opened its second location in Reno in July 2010. Opportunities allowed Great Basin to open the Taps & Tanks location in 2012 as a production facility and taproom. Great Basin is distributing several of its beers in northern Nevada, southern Nevada and northern California, and looking to expand. The company has won numerous medals at the prestigious Great American Beer Festival® and the prestigious World Beer Cup®.