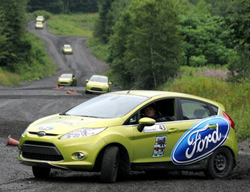 In recognition of its 20th anniversary, Team O’Neil plans to celebrate the occasion throughout the summer and fall of 2017. Rally racing fans and automotive enthusiasts can look forward to the New England Forest Rally on July 21-22, RallyFest on August 12-13, special merchandise offerings, course specials and glimpses into the past 20 years on social media and other outlets.

The school began in grassroots fashion with Tim O’Neil’s acquisition of a parcel of land in Dalton, NH. At the time, Tim ran an independent foreign car repair shop to fund his passion of rally racing and driving instruction. Tim began work on the land, first creating a skid pad and slalom course, over 20 years the facility has grown into a 6 mile network of winding roads on nearly 600 acres.

Tim’s driving experience includes five production-based US and North American Rally Championships. Tim was a factory driver for Volkswagen and Mitsubishi through the late 80s and early 90s, and drove for the official Air Force Reserve team in the early 2000s. During the 90’s Tim also worked with several manufacturers teaching advanced driving techniques and launching new products.

Team O’Neil rally training courses vary in length from introductory one-day, to in-depth five-day courses that are considered the most advanced and exhilarating driving courses of their kind in North America. While the courses have a focus on learning, there is also a strong emphasis on enjoyment and ensuring students spend plenty of time behind the wheel.

For twenty years, these courses have offered once-in-a-lifetime experiences for all types of guests, including every branch of the military, celebrities, and the starting place for action sports stars including Ken Block and Travis Pastrana. Students improve their confidence in car control as well as learn more aggressive maneuvers such as skidding through turns.

In addition to rally driving courses, the school also offers winter safe driving, off-road and security courses for individuals, private companies and government agencies. Courses offer educational and recreational experiences appropriate for all abilities. The facility sits on 585 acres of mountainous terrain with over 6 miles of stage rally roads, and miles of OHRV and four-wheel drive trails. The Motorsports division offers competition rally car preparation, support and serves as the United States distributor of M-Sport parts and car kits.