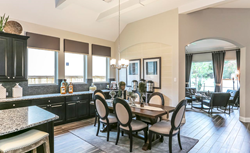 “Although we are rapidly expanding across Houston, we carefully select our development locations to ensure we build in only the most desirable areas”, said John Tucker, Chief Operating Officer.

Gehan Homes is continuing its expansion in the Houston market with three new communities. Model home openings are slated in Texas City, Richmond and the Rosenberg/Sugar Land areas.

Lakes of Bella Terra is located at the corner of Westpark Tollway and Highway 99 in Richmond, Texas, and features acres of lakes and parks. Now selling by appointment, the model will be open in early April.

Summer Lakes is a 364-acre community, located between Sugar Land and Rosenberg. The neighborhood was designed around the community’s three lakes and will feature miles of trails, a resort style pool and fountains.

“Although we are rapidly expanding across Houston, we carefully select our development locations to ensure we build in only the most desirable areas”, said John Tucker, Chief Operating Officer. “These three new communities feature our most popular floor plans and are located in great school districts, with easy access to major employers and entertainment destinations.”

Gehan Homes builds in 85 new home communities across Texas and Arizona, including 24 locations in the Houston-area. Locations and directions can be found on the company’s website. The builder is slated for continued expansion in each of the five markets they serve, throughout 2017.

About Gehan Homes
Gehan Homes, headquartered in Dallas, Texas, has been building beautiful homes at an exceptional value for over 25 years. Known for their award-winning designs, quality craftsmanship, smarter floor plans and competitive pricing, Gehan Homes is the 11th largest private homebuilder and the 29th largest homebuilder in the US. Gehan Homes has offices in Dallas, Houston, Austin, San Antonio, Texas and Scottsdale, Arizona. For more information, visit http://www.gehanhomes.com