Rivalcade, Inc. announces the official launch of its 2017 Overwatch Rumble Invitational eSports Series. The series is a brand new monthly online competition that will feature eight top professional Overwatch teams battling against eight qualifying teams for a prize pool of $10,000 per event. 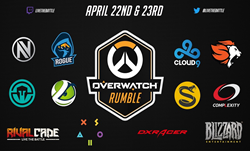 We are thrilled to bring the best professional Overwatch teams in North America together to compete, while at the same time providing an opportunity for any team to make a name for themselves by playing against the best.

Rivalcade founder and CEO Scott O’Leary stated, “We are thrilled to bring the best professional Overwatch teams in North America together to compete, while at the same time providing an opportunity for any team to make a name for themselves by playing against the best.” The structure of the event is designed to fit Rivalcade’s inclusive mission statement, which is according to O’Leary, “Not everyone is elite, but we all can compete. Live the Battle!”

The format for the Saturday Group Play is a best-of-3 Round Robin with 16 teams divided into 4 groups. The top 2 teams from each group will advance to Sunday's Double Elimination Bracket, which will be best-of-3, and the final teams will rumble in a best-of-5 Grand Final match-up. For more information, teams and fans can check out the Rivalcade Overwatch Rumble webpage.

Sean May, Platform Operations for Razer said, "Rivalcade has proven to be a pillar in the competitive community for both Overwatch and Hearthstone. Holding the $10,000 Overwatch Rumble is just another testament of their commitment to this scene. We are proud that Razer Arena is the platform of choice for both the qualifiers and the main event. The action will be epic and we can't wait to see it unfold!"

Additional giveaways and prizes from DXRacer, and Razer.

About Rivalcade
Rivalcade is an eSports lifestyle brand that lives online, on tour, and around the corner! Rivalcade is creating a one-of-a-kind omni-channel experience for esports gamers and fans, and providing the next generation of electronic sports competition. This allows Rivalcade to build brand equity for their partners, and create a conduit for compelling eSports content. For more information about Rivalcade, visit their website at here.

Rivalcade is a premier producer of esports tournaments, live events and content.

The Overwatch Rumble is a new monthly Overwatch Pro Invitational Series produced by Rivalcade and launching on Razer Arena.