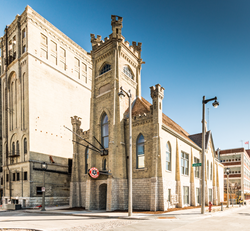 The Pabst Milwaukee Brewery is in a 144-year-old former church in the historic Pabst Brewing complex in Milwaukee.

We have invested in an amazing brewing system where we can use conventional brewing methods with varied techniques in each brew cycle to create a new generation of forward-looking craft beers.

The Pabst Brewing Company is excited to announce the official opening of Pabst Milwaukee Brewery, the company’s first craft brewery. A firkin keg tapping and blue ribbon-cutting ceremony is scheduled for later this afternoon with Milwaukee Mayor Tom Barrett, Milwaukee County Executive Chris Abele, Pabst Chairman Eugene Kashper, and Pabst CEO Simon Thorpe. The brewery’s public opening is slated for Friday, April 14 at 11 a.m. (Milwaukee Day “4/14”). Pabst will also host a grand opening celebration and street festival on May 13 from 1 to 7 p.m. The festival will feature outdoor performances from a wide variety of leading local bands, as well as games, art activities, food, and of course, Pabst Milwaukee Brewery beer.

The Pabst Milwaukee Brewery will serve as a lively gathering place for local Milwaukee residents and a destination for Pabst fans across the country. The building features a craft brewery, outdoor beer garden, a mezzanine area and a gastropub-style restaurant serving locally sourced and sustainably produced foods. In addition, the original raised altar area has been converted into a stage to allow for music performances, movie screenings, and various other forms of entertainment throughout the year.

The brewery is located in a historic 144-year old building in the heart of the original Pabst Brewing complex in the former First German Methodist Church at 1037 W. Juneau Avenue. It was purchased by Frederick Pabst in 1896 and used by the Pabst Brewing Company through the 1970s as a Ratskeller, or tavern, for Pabst employees. Pabst will brew exclusive small batch beers on-site, including some Pabst classics from the archives as well as new brews designed by Pabst Master Brewer Greg Deuhs and the Milwaukee Brewery’s head brewer John Kimes. The ten initial types of Pabst Milwaukee Brewery draft beers will also be available for off-premise consumption in 32-ounce crowlers.

The brewery will serve as Pabst’s hub for innovation and new product ideas, and will help develop the next generation of great beers in the Pabst family. A creative approach to the brewing process and ingredients used will yield unique seasonal and regionally inspired craft beers.

“We have invested in an amazing brewing system where we can use conventional brewing methods but we also have the flexibility to perform varied techniques in each brew cycle, allowing us to create both classical beer styles as well as a new generation of forward-looking craft beers,” said Deuhs, Pabst Master Brewer and winner of 2016 Brewer of the Year at the Great American Beer Festival. “Our goal with our brews is to honor the Pabst legacy while remaining at the forefront of brewing innovation and technology. We are really excited to try new hops and malts from small independent craft maltsters and to offer the people of Milwaukee some truly special beers.”

"This is a big deal for us,” said Simon Thorpe, Pabst CEO. “It is an honor to continue the incredible legacy that Frederick Pabst began over 170 years ago, and we are excited to be writing the next chapter right here alongside the people of Milwaukee."

The Pabst Milwaukee Brewery will have up to eight brewing lines going at a time and a capacity of 4,000 barrels per year.  Initial brews offered at the brewery are listed below.

About Pabst Blue Ribbon
Pabst Blue Ribbon beer (“PBR”) is a classic American lager and the flagship brand of the Pabst Brewing Company. After winning its first gold medal in 1876, PBR continued to earn recognition in competitions both in the U.S. and abroad. Originally called Best Select, and then Pabst Select, the current name comes from the blue ribbons tied around the bottle neck between 1882 and 1916. Dubbed “American’s Best” in 1893, today PBR is known as the original old school American lager. In 2016, PBR won the Gold Medal in the American lager category at the Great American Beer Festival for the 4th time in a decade. For more information about PBR, please visit http://www.pabstblueribbon.com.