Author releases never-before tales and memoirs of storied musician, Marty Harrell, in the new release: BACKSTAGE - Behind the Curtains with the Greatest Entertainers of the 20th Century 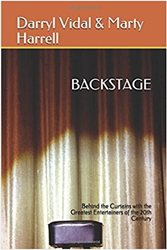 This is the biggest compilation of Sinatra and Elvis stories that have never been told before! And I was there! - Marty Harrell

Southern Califrornia-based author and actor, Darryl Vidal, known for his appearance in the original Karate Kid movie has recently published the memoirs of famed Las Vegas musician Marty Harrell. Harrell's storied past includes playing Bass Trombone for the biggest Las Vegas acts from the 1960's through the 1980's, including Frank Sinatra, the Rat Pack, Connie Stevens and backing up the legendary Elvis Presley through his legendary live tours ending with Elvis' untimely death in 1977. "This is the biggest compilation of Sinatra and Elvis stories that have never been told before! And I was there!" - Marty Harrell

BackStage is a raucously funny, compilation of stories, tales, and gems from the Golden Era of entertainment circa 1960 - 1980. The stories are told by the bass trombonist who played in the Tommy Dorsey band, with Frank Sinatra and later toured with Elvis’ Orchestra into the Rock & Roll era and to his end. Marty Harrell was also the best friend and roommate of Frank Sinatra Jr. through their Tommy Dorsey Band years, and was there during the notorious kidnapping event in Lake Tahoe that made world headlines in 1963.

The book is filled with tales of the brightest stars of the greatest era of music entertainment during the nascent days of television and new media, and provides a personal perspective of this behind the scenes character - who unknowingly bears witness to the most beloved of the era at their best - and worst. These great little gems that have never been told before, range from when Dean Martin called the police to close down his own house party, and when Marty stuffed a potato into the exhaust pipe of Liberace’s mini-Rolls Royce on live television. Another favorite is the story of when Elvis brought the whole live tour to Graceland and the bus ran through the famous wrought iron gates.

This band member also tells stories of the raw talent that could only be appreciated up close and personal, like when Frank Sinatra sight read and sang the song “My Kind of Town Chicago is” perfectly, without ever hearing the melody, or when Elvis, on his last tour, surprised the band by sitting at the piano, and belting out the most amazing performance of “Unchained Melody” without ever rehearsing it with the band. The narrative non-fiction highlights the innocence and nostalgia of the time, while providing a glimpse behind the curtains, and giving personal perspectives of these truly talented and beloved entertainers and how they interacted with the crowds and their talented backup.

Darryl Vidal is an author of several books, entrepreneur and a legendary martial artist who is credited with performing the iconic Crane Technique on the beach (as Pat Morita's body double) made famous around the world in the original 1984 Academy Award-nominated Karate Kid.