Stevens Institute of Technology is tasked by the Department of Defense with helping develop safer, more energy-efficient munitions facilities 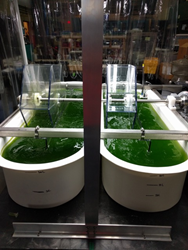 Our treatment processes not only oxidize DNAN in wastewater, but also recover and reuse the reaction products, including carbonate and nitrate, as carbon and nitrogen. Xiaoguang Meng, environmental engineering professor

Weapons manufacture is a costly, environmentally destructive business. One federal report has estimated that 15 million acres of U.S. land are contaminated by munitions operations and that cleaning up these sites completely would cost anywhere from $8 billion to $35 billion.

Now Stevens will play a role in a new effort to retrofit munitions plants with more environmentally friendly and safer processes. Under a series of recent Department of Defense-issued contracts and awards, the university is taking the lead in an exciting new area: the greening, or "net-zeroing," of America's munitions-production bases.

The $8 million project involves multiple Stevens departments, faculty and initiatives and is led by professor Christos Christodoulatos, director of the university's Center for Environmental Systems (CES) and principal investigator for the project.

In January 2014, the Secretary of the Army distributed a new directive known as the Net Zero Installations Policy. That policy established a goal of "net zero" in energy, water and solid waste at munitions plants and other U.S. defense facilities, building on existing sustainability efforts.

Stevens turned out to be perfectly positioned to assist in that goal.

"We have maintained a close working relationship with the Department of Defense going back decades," notes Christodoulatos. "In munitions alone, we have been working together since 1989. It was a natural fit."

Faculty, student and postdoctoral researchers are developing technologies for a pilot project at the Holston Army Ammunition Plant, a 6,000-acre facility in northeastern Tennessee where explosives and other munitions are developed, tested and manufactured. That facility currently produces approximately 5 million pounds of waste annually — 50 tons per week — primarily corrosive nitric acids and environmentally undesirable nitrate salts.

The Stevens project has several research components. One involves the breakdown of hazardous or desirable wastes into harmless substances. DNAN (2,4-dinitroanisole, or C7H6N2O5), a synthetic explosive developed as a safer alternative to TNT, is one: moderately toxic, it tints water bodies with an unsightly yellow color. A Stevens team has developed a process of treating wastewater containing DNAN with a combination of ultraviolet light and hydrogen peroxide. A moderate level of peroxide, the team found, degrades DNAN to relatively harmless nitrate, carbon dioxide and water.

"Current treatment processes can destroy and remove DNAN and other nitro-organic compounds in wastewater only," explains environmental engineering professor Xiaoguang Meng, lead researcher on the project and a renowned expert on the filtering toxic substances from water. "Our treatment processes not only oxidize DNAN in wastewater, but also recover and reuse the reaction products, including carbonate and nitrate, as carbon and nitrogen."

In collaboration with the University of New Haven, the Stevens team is also designing a process to produce biomass energy from munitions-plant wastewater streams. Organic material and nitrates can be used to rapidly cultivate colonies of tiny microalgae in nitrogen-rich environments; the microalgae, cultivated in quantity, can then be processed to produce relatively high yields of oil and biogas energy.

"Although we began researching on a microscale, we have scaled up several times already," he points out. "We now believe there is no reason the same technologies can't be used in a baseball field-sized pond, or a large tub or other container that produces energy for a portion of a facility, or even for an entire one."

In Stevens' labs, algae samples are grown in special bioreactor tubs that gently agitate the colonies in enriched water, stirring them with pinwheel-like paddles. Researchers experiment with different species of saltwater and freshwater algae in various liquid media, at different light and dark exposure levels, in search of better yields.

Another team — led by chemical engineering and materials science professor Adeniyi Lawal — harvests the algae-rich water in a collection tube, whirls it in a centrifuge to collect the solids, and mixes the algae with solvents to purify power-packed algal oil.

"You can make a lot of oil from these algae," explains Christodoulatos.

Indeed, algal oils are a hot new area of alternative energy research thanks to a number of beneficial properties. Unlike petroleum fuels, oil distilled from algae is unlikely to ignite suddenly. It's possible to produce up to 60 times more oil from an acre-sized algae farm as ethanol from an acre of Midwestern corn.

The oils are also easy to cultivate in both fresh and salt water, and they degrade relatively quickly and harmlessly in the environment compared with synthetic or fossil fuels. United Airlines demonstrated a partially algae-powered flight from Chicago to Houston in 2011, offering a glimpse at a promising future far less dependent upon nonrenewable fossil fuels. If military facilities can be modified to operate using algal oil as fuel, the process will have come full circle.

"You've started with a quantity of wastewater that was not really safe or useful to do anything with," concludes Christodoulatos, "and you've done something novel with it to render it not only harmless but actually beneficial. Then you've used this treated water to grow biomass, which is then converted to biofuel, and that is powering your plant. It's a win-win."

About Stevens Institute of Technology
Stevens Institute of Technology, The Innovation University®, is a premier, private research university situated in Hoboken, N.J. overlooking the Manhattan skyline. Founded in 1870, technological innovation has been the hallmark and legacy of Stevens’ education and research programs for 147 years. Within the university’s three schools and one college, 6,600 undergraduate and graduate students collaborate with more than 300 full-time faculty members in an interdisciplinary, student-centric, entrepreneurial environment to advance the frontiers of science and leverage technology to confront global challenges. Stevens is home to three national research centers of excellence, as well as joint research programs focused on critical industries such as healthcare, energy, finance, defense, maritime security, STEM education and coastal sustainability. The university is consistently ranked among the nation’s elite for return on investment for students, career services programs and mid-career salaries of alumni. Stevens is in the midst of a 10-year strategic plan, The Future. Ours to Create., designed to further extend the Stevens legacy to create a forward-looking and far-reaching institution with global impact.