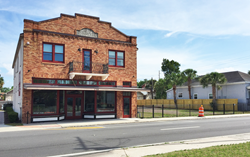 ...the firm has outgrown their current 4,500 SF office building and is planning to expand their operations.

Design Styles Architecture (DSA) today announced they have purchased a vacant lot adjacent to their current office building in Ybor City. Located on Columbus Drive, directly next door to the J.C. Newman Cigar Factory, the firm has outgrown their current 4,500 SF office building and is planning to expand their operations. The firm started this year with twenty-six employees but has already grown to thirty-one, an increase of fifteen percent. No plans for the lot have been announced. DSA plans to use the lot as additional parking for the time being.

DSA moved from Clearwater to East Tampa in 2013 after purchasing the historic Ybor building in 2011 and restoring it to become Tampa first historic LEED Certified building. The building earned a LEED Gold certification for energy efficiency and met all requirements to become a historic property within Tampa, which makes it the first of its kind in the city. The process was documented in a short Vimeo video put out by the Firm in 2014.

East Tampa has been slow to the redevelopment boom in Tampa over the past decade. Recent improvements to Columbus Drive, including the repaving and striping from 15th St to 22nd St, and the addition of on-street parking, have started to indicate some development moving north from Ybor’s central core. A 2,900SF historic home was recently relocated by the D.O.T. to a vacant lot directly across the street from DSA’s office. Considering the preparation of reverting Columbus Drive to a 2-way street, the potential for walkable streets lined with homes, and businesses like DSA, East Tampa is on the verge of returning to the vibrant neighborhood it was long ago.