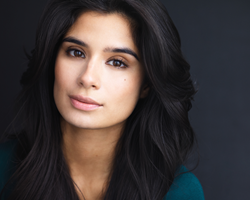 Salt Lake Community College’s Community Writing Center on May 4, at 6 p.m., will host Diane Guerrero for a Q&A and a book signing of her new memoir “In The Country We Love: My Family Divided.” The Center is located at 210 E. 400 S., Suite 8, at the Salt Lake City Public Library complex.

Guerrero, known for her roles in the Netflix series Orange Is the New Black and The CW Network series Jane the Virgin, will be SLCC’s keynote speaker during its 2017 commencement ceremonies May 5 at the Maverik Center in West Valley City.

Guerrero was raised in the Jamaica Plain and Roxbury neighborhoods of Boston after being taken in by other Colombian families. She had an interest in acting since a young age and took advantage of free opportunities in the neighborhood or at school. Then she attended Boston Arts Academy, a performing arts high school, where she was in the music department. In 2015, Guerrero was named a White House Ambassador for Citizenship and Naturalization. She is an outspoken advocate for common sense, comprehensive immigration reform and has worked with Immigrant Legal Resource Center and Mi Familia Vota, a nonpartisan Latino civic engagement organization to promote citizenship and voter registration. Variety named her one of the top 10 Latina actresses to watch.

“In the Country We Love” is a moving, heartbreaking story of one woman's extraordinary resilience in the face of the nightmarish struggles of undocumented residents in this country. There are over 11 million undocumented immigrants living in the U.S., many of whom have citizen children, whose lives here are just as precarious and whose stories haven't been told. Written with bestselling author Michelle Burford, this memoir is a tale of personal triumph that also casts a much-needed light on the fears that haunt the daily existence of families like the author's and on a system that fails them over and over. More information about Guerrero’s book, which will be available for purchase at the signing, can be found at http://www.inthecountrywelove.com.