Ten-day multi-sport human rights and cultural event will bring together LGBTQI and LGBTQI-friendly athletes from around the world. 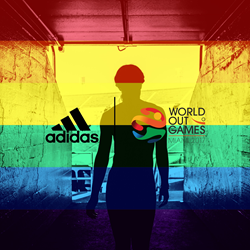 adidas today announced a collaborative partnership with World OutGames Miami 2017, a 10-day, multi-sport human rights and cultural event from May 26 to June 4, 2017.

Sport plays a critical role in our culture today and we can harness that influence to make real change for the world. We want to foster a culture in sports that celebrates diversity and provides a safe place for everyone to play.

adidas today announced a collaborative partnership with World OutGames Miami 2017, a 10-day, multi-sport human rights and cultural event from May 26 to June 4, 2017. Making its U.S. debut, the highly-anticipated event will welcome LGBTQI athletes from more than 40 countries - many where homosexuality remains illegal and hidden. In the spirit of true inclusiveness, the World OutGames are open to all, regardless of sexual orientation.

“We believe that through sport, we have the power to change lives,” said adidas North America President Mark King. “We believe in the power of sport and its ability to transcend differences and unite people around hope and celebration. Sport plays a critical role in our culture today and we can harness that influence to make real change for the world. We want to foster a culture in sports that celebrates diversity and provides a safe place for everyone to play.”

Athletes will arrive at World OutGames Miami ready to challenge themselves physically in a variety of sports. With skill levels ranging from beginner to competitive, the roster of sporting events includes, but is not limited to, basketball, bodybuilding, dance sport, field hockey, running, soccer, swimming, tennis, track & field, triathlon and volleyball.

World OutGames Miami will also feature the 4th Global LGBTQI Human Rights Conference, a three-day event (May 26-29) which will be a powerful global gathering of internationally respected human rights activists, researchers, legal scholars and trade organizations. Attendees will enjoy many cultural happenings, including Pulse Points on June 1, an artistic response to the Orlando massacre at Pulse
Nightclub, fusing dance, music, poetry and visual arts to honor the 49 lives that were lost. Art exhibits, history tours, a poetry reading with Robert Pinsky and a film festival are also planned.

“The endorsement and support of adidas is significant for World OutGames Miami,” said World OutGames CEO Ivan Cano. “adidas’ social and environmental commitment to creativity and diversity and its mission to be ‘the best sports brand in the world’ aligns with our goal to excel and achieve in all areas of athletics, culture and human rights. The adidas alliance will allow us to reach an even greater international audience seeking to champion and celebrate inclusion and equality across a variety of platforms.”

A champion of diversity and inclusion, adidas received a perfect score of 100 in 2016 and 2017 on the Human Rights Campaign’s Corporate Equality Index, which rates workplaces on lesbian, gay, bisexual and transgender equality. While adidas has always celebrated individuality and fostered fairness, the brand in 2016 formally added a clause to its athlete contracts underscoring its commitment to its partners regardless of sexual orientation. adidas creates special-edition footwear and apparel that celebrates the importance of pride in the LGBTQI community, and the brand has donated a percentage of those sales to charities that support lesbian, gay, bisexual and transgender youth.

World OutGames Miami is made possible through the support of adidas, the City of Miami Beach, Florida Sports Foundation, Miami Beach Visitor and Convention Authority, Coca-Cola, Greater Miami Convention & Visitors Bureau, Bacardi, Happy Copenhagen, Arts & Business Council of Miami, the International Institute on Race, Equality and Human Rights, Miami Sports, Hotspots Media Group, OutClique, South Florida Gay News, 93.9 MIA and additional contributions from many individuals and businesses. World OutGames Miami is funded in part by a grant from the City of Miami Beach, along with the support of the Miami-Dade County Department of Cultural Affairs and the Cultural Affairs Council, the Miami-Dade County Mayor and Board of County Commissioners.

About adidas
adidas is a global leader in the sporting goods industry with the core brands adidas and Reebok. Headquartered in Herzogenaurach, Germany, adidas employs more than 60,000 people across the globe and generated sales of € 19 billion in 2016.

About World OutGames
World OutGames is a multi-sport and cultural event that is licensed by the Gay and Lesbian International Sport Association (GLISA). Every four years, World OutGames brings together athletes from all over the world in unprecedented numbers for a celebration of sport, culture and human rights, many from countries where homosexuality remains illegal and hidden. Previously hosted in Montreal, Copenhagen and Antwerp, World OutGames is open to all who wish to participate, without regard to sexual orientation. There are no qualifying standards, although competitions are arranged according to the skill levels of the competitors. For more information about World OutGames, visit http://www.outgames.org, http://www.facebook.com/OutGamesMiami, http://www.twitter.com/outgamesmiami and http://www.instagram.com/outgamesmiami.