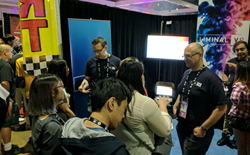 80% of people reported feeling excited or cheerful after Ion. 79% of people identified as calm or relaxed after Ripple effect

Rubbing shoulders with many of the world’s best VR companies congregating at the Los Angeles Conference Centre on 14 and 15 April 2017, Melbourne-based virtual reality company Liminal VR presented to hundreds of attendees on ‘Inducing Emotional & Cognitive States in VR’ making a couple of big announcements in the process.

The chief announcement was that Liminal will be launching a consumer psychology VR platform early next year for Google Daydream and Gear VR. The platform will contain a range of short experiences designed to directly induce emotional states such as calm or energy.

To populate the platform with a range of unique content, Liminal also announced that it will be making research prepared by its team of psychologists available to select partners via the Liminal Partnership Programme. Partners will include virtual reality developers who wish to create experiences for the platform using the Unity game engine, educational institutions who wish to incorporate the research into their VR curriculum, and researchers who wish to contribute research to the platform.

The announcement was met with great applause from the developer community with a sea of VR developers wanting to throw their hats in the ring and join the Partnership Program to create short but deeply moving VR experiences. Liminal will be announcing some of their partners over the next few weeks with many more to come.

“The reactions from the announcement have been extremely positive and we’ve been approached by several VR developers with plans to make their own calming or energising experiences for Liminal’s upcoming platform. We’re also in talks with various educational institutions hoping to introduce Liminal’s research into their curriculum.” - Damian Moratti, co-founder and CEO of Liminal VR.

Throughout the expo, Liminal was showcasing two of their latest experiences including ‘Ion’, an energising virtual reality experience, and ‘Ripple effect’ designed to cause deep relaxation. In true Liminal fashion, the team made use of a built in psychometric testing feature to assess emotional change from the experiences.

“The results are amongst the best we’ve seen so far. 80% of people reported feeling excited or cheerful after Ion. 79% of people identified as calm or relaxed after Ripple effect. The progressive tweaks and adjustments we make from our testing sessions are critical to the success of our experiences.” - Nick Busietta, co-founder and Managing Director of Liminal VR.

For more information about the Liminal Partnership Programme, visit https://liminalvr.com.

Liminal VR combines neuroscience and design principles in virtual reality to induce a range of cognitive and emotional states in people. Starting with calm and energy, their mission is to safely empower people to choose how they want to feel throughout the course of the day.