UBA and Its More Than 2,000 Partners Are United Toward Benefits Excellence 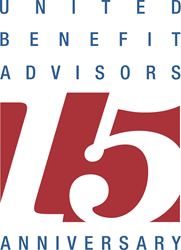 "With more than 130 Partner Firms, this is a great time for UBA and its partner firms to celebrate our role in helping employers. - Scott Deru, UBA Chairman of the Board

Led by co-founders and visionaries David LoCascio and Chris John, this group saw unlimited potential and power in sharing their collective expertise and knowledge to form a partnership called United Benefit Advisors. They firmly believed that the collective wisdom, expertise, experience and unique strengths which resides within the top independent benefits firms had the potential to not only meet these challenges, but to capitalize on the tremendous opportunity they represent.

“Since being founded in 2002 with 31 Charter Partner Firms, UBA has grown significantly from its humble beginnings,” says Scott Deru, UBA Chairman of the Board. “Now with more than 130 Partner Firms, this is a great time for UBA and these firms to celebrate our role in helping employers provide affordable health care to their employees and live better lives.”

In just 15 years of dedicated service to the benefits industry, UBA has increased its partnership by more than 400 percent and its benefits revenue by more than 300 percent. While more than 130 Partner Firms currently make up UBA, they all remain independent agencies. Some UBA milestones:

ABOUT United Benefit Advisors®
United Benefit Advisors® (UBA) is the nation’s leading independent employee benefits advisory organization with more than 200 offices throughout the United States, Canada and the United Kingdom. UBA empowers more than 2,000 Partners to both maintain their individuality and pool their expertise, insight, and market presence to provide best-in-class services and solutions. Employers, advisors and industry-related organizations interested in obtaining powerful results from the shared wisdom of our Partners should visit http://www.UBAbenefits.com.