Among 51 American cities surveyed, Seattle ranked in the top 10 in 19 out of the 26 civic categories. 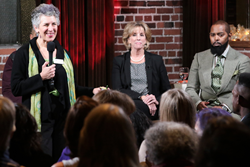 “We commend Seattle CityClub for its leadership and its work designed to strengthen civic health in Seattle,” said Sally Prouty, Interim CEO of NCoC

The 2017 Greater Seattle Civic Health Index is scheduled for public release May 23 by Seattle CityClub. In collaboration with the National Conference on Citizenship (NCoC), the 2017 report ranks 51 American cities across 26 categories measuring civic engagement and the health of their democracies.

Started in 2006 by the NCoC, the Civic Health Index (CHI) examines how Americans connect with each other and their communities by surveying the levels of volunteerism, voting, philanthropy, neighbor-to-neighbor connectivity, political expression and religious affiliation amongst residents. The Civic Health Index uses census data provided to the NCoC from the Corporation for National and Community Service.

Of the 51 cities studied in 2017 Greater Seattle Civic Health Index, Seattle ranked in the top 10 in 19 of the 26 categories, including 1st in charitable donations over $25, 1st in group participation and 2nd in product boycotting. Seattle’s reputation for being a difficult city to make new friends in—commonly referred to as the “Seattle Freeze”—also improved. When it came to residents doing favors for their neighbors, Seattle improved from 37th in 2014 to 6th in 2017 among the 51 cities studied.

According to NCoC research, communities with strong indicators of civic health as measured by the Civic Health Index have higher employment rates, stronger schools, better physical health, and more responsive governments. “We commend Seattle CityClub for its leadership and its work designed to strengthen civic health in Seattle,” said Sally Prouty, Interim CEO of NCoC.

The 2017 Civic Health Index will be available May 23 at SeattleCityClub.org.

A preview of the 2017 Civic Health Index will be provided to participants at FullConTech, a cross-sector collaboration conference at Seattle City Hall organized by Washington Technology Industry Association (WTIA) on May 22. FullConTech participants will utilize the 2017 Greater Civic Health Index as a tool to inform the direction of their conversations and solutions around civic health.

If you are interested in Seattle CityClub speaking about the 2017 Civic Health Index at your organization or event, please contact Diane Douglas, Seattle CityClub Executive Director at ddouglas(at)SeattleCityClub(dot)org or 206.682.7395.

About the National Conference on Citizenship
The National Conference on Citizenship (NCoC) is dedicated to strengthening civic life in America. We pursue our mission through a nationwide network of partners involved in a cutting-edge civic health initiative, our cross-sector conferences and engagement with a broad spectrum of individuals and organizations interested in utilizing civic engagement principles and practices to enhance their work. Connecting people for the purpose of strengthening civic life is our goal. At the core of our joint efforts is the belief that every person has the ability to help their community and country thrive.