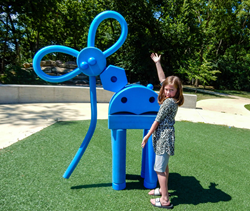 I’m the happiest kid in the world!

The 2017 prize pool featured a Grand Prize of an all-expenses-paid trip to build at the Imagination Playground Park in New York City and a 105-piece set of Imagination Playground Big Blue Blocks. Additionally, 1st, 2nd, and 3rd place prizes for both digital and physical builds were awarded—over 500 winners in all. Winners have the option to keep the prizes or donate to their favorite school or family center.

The Grand Prize was awarded to an inventive girl, Kaylee, from Kansas who built her winning creation at the Kansas Children’s Discovery Center. Her mother, Rebecca, recalls how the creation came to life and says she originally set out to build a flower but as she placed the second petal Kaylee exclaimed, “look mom, it looks like an elephant head!” Kaylee proceeded to look for blocks to build the body and legs of the elephant, going on to say, “it was so creative to watch her start with one idea and then transform the build into something entirely different when she got the inspiration.” Kaylee’s enthusiasm could not be contained as her mom told her of her Grand Prize win, and after a few moments of squeals of delight she said, “I’m the happiest kid in the world!”

Imagination Playground President Dave Krishock said, “It was such a delight to watch the video Kaylee’s mom shared with us of her reaction to the big win! Bringing joy to children is what this contest is all about! Our second annual Build-A-Thon contest was even more successful than last year and we look forward to many contests for years to come where we can offer a platform for kids to build, create and feel proud of their creations as they submit to the contest. It just gets better every year!”

The second annual Build-A-Thon contest has been especially successful due to viral sharing of submission images on social media and overall increased awareness of the contest. Particularly in the last weeks leading to the contest end, the excitement generated on social media triggered a surge of new entries, making it a formidable contest amongst the builds submitted, and challenging task for the judges to select winners!