A new study by PsychTests.com indicates that while individuals with high and low self-esteem may both desire power, their motivations vary considerably. 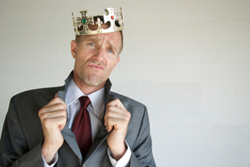 A person’s attitude toward power depends significantly on their self-esteem.

While a desire for power can be found in people with high self-esteem as well as low, this desire stems from difference sources and different motivations.

What compels a politician to throw his or her hat in the ring and run for president? And once in a position of power, what is the strongest factor that can bring about their demise? The answer, according to research from PsychTests, is self-esteem. For those with high self-esteem, power is an ambition, a motivation, a validation of their worth. For those with low self-esteem, it’s an ego-bruising pursuit that results in blow after blow to their confidence.

Analyzing data from 1,948 people who took their Dominance Test, researchers examined participants’ attitude toward power within the framework of their self-esteem. Here’s how people with high and low self-esteem compared:

For people with high self-esteem, gaining power is just one of their many ambitions. They want to be in a position of authority because they believe they deserve the accolade and success. For those with low self-esteem, power comes with responsibility and accountability, neither of which they believe they can handle. People who suffer from “Imposter Syndrome” (the belief that they do not deserve any of the success they have attained) are more likely to have low self-esteem.

People with high self-esteem recognize that they do not need to be in a position of power in order to be respected. For those with low self-esteem, it’s a catch-22: While they feel that power is important for respect, they are also concerned that being in a position of authority can bring to light their weaknesses, proving to others that they can’t handle the responsibility.

The high self-esteem group believes that they should be respected by default because they deserve it. While those with low self-esteem understand that respect should be earned, they are still not sure whether they are worthy of it.

While people with high self-esteem see power as an ego boost and proof that they are deserving of their position, those with low self-esteem view a position of authority as a challenge that they may not be able to overcome.

People with high self-esteem won’t settle for the status quo or an “average” performance. Battling for top spot ignites their competitive spirit. Individuals with low self-esteem are plagued by extreme perfectionism, and may often set unreasonable goals for themselves in an effort to prove their worth. Unfortunately, the inevitable disappointment of not living up to these extreme standards only serves as another blow to their already fragile ego.

For the high self-esteem group, measuring up their achievements to those of others acts as a source of motivation and pushes them to accomplish more. For those with low self-esteem, the juxtaposition is a double-edged sword: If they come out on top in the comparison, they feel good about themselves. If they are not as successful as those they compare themselves to, it’s yet another blow to their ego.

Losing brings out the high self-esteem group’s competitive spirit; losing only makes them want to try harder and keep battling until they come out on top. For the low self-esteem group, they see losing as confirmation of their incompetence.

“While a desire for power can be found in people with high self-esteem as well as low, this desire stems from difference sources and different motivations,” explains Dr. Jerabek, president of PsychTests. “Politicians or executives with high self-esteem are more likely to seek power because it reflects their ambitious and competitive nature, and because they truly believe that with power, they can bring about great things. In contrast, individuals who hunger for power because they crave the respect and the status are motivated by their ego – and behind a large ego is almost always a fragile self-esteem, and an intense need for approval. This is often the reason why some people in a position of power almost seem to go mad with it. They’re so hung up on the high of being on top that they will throw their weight around; they’ll make others feel small and weak in order to boost their own ego and feel better about their own shortcomings. Power comes with great responsibility; it takes a good dose of humility for those in a position of power to stay grounded and maintain perspective. It takes a solid self-esteem to shoulder the pressure that a position of authority entails. Those who lack this key trait will either crumble under the weight of responsibility, or go on a power trip that results in significant consequences.”

Want to assess your attitude toward power? Check out http://testyourself.psychtests.com/testid/2117