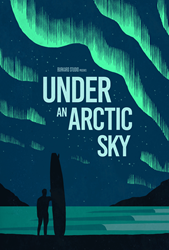 "Under an Arctic Sky" by Chris Burkard

On June 8th, Adorama will be hosting a film screening of "Under an Arctic Sky," a documentary film that follows six surfers along with photographer Chris Burkard on their journey to Iceland in search of perfect waves during the largest storm in 25 years.

Next Thursday, June 8th, Adorama, one of the world’s largest photography, video, audio, imaging and electronics retailers, will be hosting a film screening of “Under an Arctic Sky,” a documentary film that follows six surfers along with photographer Chris Burkard on their journey to Iceland’s north coast in search of perfect waves during the largest storm in 25 years. The film first premiered this past April at the Tribeca Film Festival to a sold-out crowd.

Watch the trailer for “Under an Arctic Sky”

Currently the last scheduled screening date of the crew’s tour, the Adorama screening of “Under an Arctic Sky” will take place at 6:30pm and 8:30pm next Thursday, June 8th at the AMC Empire 25 Theater on W. 42nd Street in New York City. Each screening will begin with a meet & greet with executive producer / director Chris Burkard and a 20-minute presentation from Chris and crew. Tickets ($20) are selling quickly – purchase yours today.

Request a Press Pass
Members of the media are invited to attend the screening of “Under an Arctic Sky.” To request a press pass, please contact Anya Nelson at anya(at)zazilmediagroup(dot)com.

About Chris Burkard
Chris Burkard is an accomplished explorer, photographer, creative director, speaker, and author. Traveling throughout the year to pursue the farthest expanses of Earth, Burkard works to capture stories that inspire humans to consider their relationship with nature, while promoting the preservation of wild places everywhere. Learn more: http://www.chrisburkard.com.

“Under an Arctic Sky” Film Synopsis
The film follows six surfers along with adventure photographer Chris Burkard and filmmaker Ben Weiland as they seek out unknown swell in the remote fjords of Iceland's Hornstrandir Nature Reserve. Chartering a boat, they depart from Isafjordur on the cusp of the largest storm to make landfall in twenty-five years. With the knowledge that storms bring legendary swell the crew are optimistic, but face failure when the storm forces them back to shore. Making the decision to carry the expedition on by road they experience the brutality of Iceland's winter and begin to question if searching out the unknown is worth risking their lives for. Despite setbacks the team pushes on and finds that uncertainty is the best ingredient for discovering the unimaginable.

Adorama is listed as one of the top five electronics retailers by Consumer Reports, “Best of the Web” by Forbes.com, Internet Retailers Top 100, and is the official Electronics Retailer of the NY Giants. Visit ADORAMA at http://www.adorama.com.