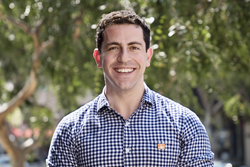 In today’s political environment, where rights and protections for LGBTQ young people are being rescinded and anti-LGBTQ legislation is moving forward, The Trevor Project is needed more than ever.

The Board of Directors of The Trevor Project—the nation’s leading suicide prevention and crisis intervention organization for lesbian, gay, bisexual, transgender, and questioning (LGBTQ) youth—announced today that Amit Paley will become the organization’s next Chief Executive Officer and Executive Director.

Paley, 35, is a leading expert on healthcare and non-profit management at the global consulting firm McKinsey & Company, where he is an Associate Partner serving numerous non-profit organizations, Fortune 500 companies and governments. He is also a leader of McKinsey’s LGBTQ group and spearheaded the firm’s global efforts on inclusion for transgender and gender non-conforming people.

A six-year counselor on the organization’s 24/7/365 Trevor Lifeline where he answered thousands of calls from youth in crisis, Paley is the first volunteer to become the CEO of the organization in its 19-year history. He has also served on Trevor’s Board of Directors, chairing the board’s Public Policy and Advocacy Committee and its Strategic Planning Committee, and leading the development of Trevor’s strategic plan as a pro bono consultant.

“Amit has the experience, insights, passion and vision this organization needs to navigate how we continue to lead the design and implementation of crisis intervention services,” said Michael Norton, chair of The Trevor Project’s Board of Directors. “He not only comes to us with a proven track-record working with leading non-profit and health care organizations, he has a deep understanding of our life-saving work from his many years of fielding calls on the Trevor Lifeline. With Amit, we've got a skilled, thoughtful and innovative steward of this organization.”

Paley, a magna cum laude graduate of Harvard College with an MBA from Columbia Business School and Master’s from Columbia’s Graduate School of Journalism, was a reporter at The Washington Post before joining McKinsey. He covered numerous beats, including as a foreign correspondent based in the paper’s Baghdad bureau, where his work was nominated for a Pulitzer Prize; a financial investigative journalist; and the paper’s national education reporter. Paley also worked in the corporate strategy office of The Washington Post Company. Earlier in his journalism career, he uncovered the existence of an 80-year-old secret court at Harvard University that persecuted gay students, several of whom died by suicide.

“I am so honored and thrilled to join the incredible team of staff, volunteers, donors and supporters who make up The Trevor Project family and literally save lives every day,” said Paley, who will officially become CEO on June 19. “In today’s political environment, where rights and protections for LGBTQ young people are being rescinded and anti-LGBTQ legislation is moving forward, The Trevor Project is needed more than ever. Whenever gay, lesbian, bisexual, transgender, queer, or questioning young people are in crisis, they know they are not alone because The Trevor Project is here to listen and help. We will always fight for LGBTQ young people, alleviate crisis, and help prevent LGBTQ youth suicide.”

Paley is involved with several non-profit organizations in addition to The Trevor Project. He is a former president of The Harvard Crimson, where he is now vice chair of its board of directors and oversees the organization’s financial aid program; a board member of the Center for Public Integrity, the Pulitzer-Prize-winning organization that published the Panama Papers; and was previously an adjunct professor of entrepreneurial journalism at City University of New York.

About the Trevor Project:
The Trevor Project is the leading and only accredited national organization providing crisis intervention and suicide prevention services to lesbian, gay, bisexual, transgender and questioning (LGBTQ) young people under the age of 25. The Trevor Project offers a suite of crisis intervention and suicide prevention programs, including TrevorLifeline, TrevorText, and TrevorChat as well as the world’s largest peer-to-peer social support network for LGBTQ young people under the age of 25, TrevorSpace. Trevor also offers an education program with resources for youth-serving adults and organizations, a legislative advocacy department fighting for pro-LGBTQ legislation and against anti-LGBTQ rhetoric/policy positions, and conducts research to discover the most effective means to help young LGBTQ people in crisis and end suicide. If you or someone you know is feeling hopeless or suicidal, our Trevor Lifeline crisis counselors are available 24/7/365 at 866.488.7386. http://www.TheTrevorProject.org