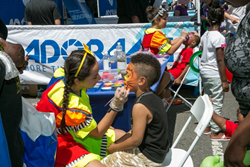 Stop by the Adorama Sunday Family Funday Street Fair this Sunday for activities for the entire family!

Adorama, one of the world’s largest photography, video, audio, imaging and electronics retailers, is continuing its annual tradition of taking over 18th Street (between 5th and 6th Avenues) for the 7th annual Adorama Sunday Family Funday Street Fair on June 11th from 10 AM to 4 PM. Free for all to attend, the Street Fair is the perfect summer kickoff for families, sports fans and tech gurus alike. Join Adorama for carnival games, meet and greets with superstar football players like New York Giants’ Super Bowl Champions Rodney Hampton, OJ Anderson, Shaun O’Hara, and David Diehl as well as complimentary drone and aerial photography workshops and more. Attendees 18 and up will even have the chance to win a Samsung 55” Class 4K SUHD Smart LED TV simply by registering online. Don’t miss a packed day of fun in Manhattan!

Check out the footage from last year’s fun-filled fair!

Join the following players on June 11th for a day of exciting workshops, entertainment and more!

Shop Top Industry Vendors for the Latest Photo, Video, Audio and Electronics Gear
Visit vendor tables up and down the block to sample the latest offerings in photo, video, audio, electronics and more at the Adorama Street Fair. Keep eyes and ears open – attendees will also be privy to news on Adorama deals and discounts on products available that day at the Adorama superstore, located within the fair block at 42 W. 18th Street.

Learn How to Fly Drones, Aerial Photography Tips with Dirk Dallas
Join designer, educator and photographer, Dirk Dallas as he walks attendees through the ins and outs of flying drones and the nuances of aerial photography. Dirk has been flying various electric helicopters and RC airplanes for over 10 years. After getting his first drone, he became obsessed with aerial photography and video and started http://www.fromwhereidrone.com to provide a helpful resource for those interested in getting started with aerial photography / cinematography. His site is also a space to find amazing drone imagery, learn from the leaders in the drone world and learn all about drones, from buying guides to FAA regulations and more! Watch “From Where I Drone” with Dirk Dallas on AdoramaTV.

Adorama is listed as one of the top five electronics retailers by Consumer Reports, “Best of the Web” by Forbes.com, Internet Retailers Top 100, and is the official Electronics Retailer of the NY Giants.