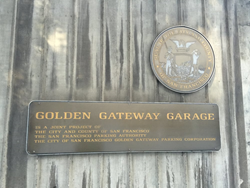 The SFMTA maintains operational oversight of the Golden Gateway Garage

“Taking into account the considerable amount of horsepower powering Golden Gateway’s mechanical ventilation system and the average fan-motor runtime – 18 hours a day – the energy savings captured by the NES system is outstanding,”

The Nagle Energy Solutions (NES) innovative garage-ventilation control system continues to deliver exceptional operational efficiencies and energy savings; this time limiting the energy consumed by a sizable mechanical ventilation system at the City & County of San Francisco’s Golden Gateway Garage to just 7% of its full-load capacity – the equivalent of a 93% reduction in kilowatt-hour (kWh) consumption and peak kilowatt (kW) demand.

In 2015, engineers for the City & County of San Francisco selected the NES digital, demand-control ventilation (DCV) system for commercial garages as the basis of design for upgrading the mechanical ventilation systems of three, City owned properties: Golden Gateway Garage; Sutter-Stockton Garage; and Japan Center Garage. The Golden Gateway mechanical ventilation system retrofit is the first to be completed, and the NES system has been monitoring energy consumption on a real-time basis – a standard capability of NES controllers – since its commissioning in July 2016.

Golden Gateway Garage is a three-level, 345,000 square feet, enclosed parking facility in the heart of downtown San Francisco, subdivided in to East and West garages, each measuring 172,500 square feet. It can accommodate a total of 1,095 vehicles. The upgrade of its mechanical ventilation system included the installation (by third-party vendors) of Huntair Fanwall technology in conjunction with ABB variable frequency drive (VFD) technology. In all, 12 new, fanwall units and four new, stand-alone garage ventilation motors were installed possessing a combined 155.5 horsepower (HP). Tying it all together is the NES system, controlling the primary motor / VFD functions based on carbon monoxide (CO) concentrations in the garage.

“Without a doubt, the SFMTA is delighted with the results,” said David Dunham, Principal Analyst for the San Francisco Municipal Transportation Agency (SFMTA), which maintains operational oversight of all San Francisco municipal garages. “Taking into account the considerable amount of horsepower powering Golden Gateway’s mechanical ventilation system and the average fan-motor runtime – 18 hours a day – the energy savings captured by the NES system is outstanding,” Mr. Dunham noted.

With no means of ventilation control in place, Golden Gateway’s new motors would consume more than 719,000 kWh throughout the course of a calendar year – or approximately 60,000 kWh per month – with a correlating, annual peak kW demand of more than 115 kW. The electric utility rate for the garage is $0.182/kWh, so at the calculated rate of kWh consumption, the annual cost to ventilate the garage would amount to more than $131,000 – not including or factoring in future utility rate increases.

Post-installation monitoring and data logging shows the NES digital, garage DCV system is limiting energy consumption to about 4,200 kWh a month or 50,000 kWh per year. That corresponds to reoccurring, annual energy savings of approximately 669,000 kWh. Peak kW demand is limited to 8 kW per year with the NES system in place and controlling Golden Gateway’s garage ventilation system.

The NES system also slashes energy costs by 93%. The cost to ventilate the garage averages $760 a month – versus an approximate $11,000 a month without the NES system. The NES DCV system will provide minimum cash inflow (from the energy savings) in excess of $1.8 million throughout its 15-year lifespan.

The significance of the energy savings is underscored when viewed in context to health and safety factors at Golden Gateway.

The garage’s payment system requires patrons to pay an attendant in a toll booth before exiting the garage, which results in long traffic lines each weekday between noon and 3 p.m., as a steady stream of drivers simultaneously attempt to exit. As a means to constrain CO concentrations, NES teamed with garage management to — via the NES TR100 controller — increase the baseline motor speed of one of Golden Gateway’s large exhaust-fanwall systems on a 24/7 basis. Additionally, NES set a daily “purge” schedule, increasing the ventilation rate in the garage twofold by automatically ramping the speed of all, remaining exhaust and supply fan motors for three (3) hours a day – from noon to 3 p.m. – Monday thru Friday.

“Beyond ensuring environmental sustainability, protecting the health and safety of garage employees and patrons were critical considerations during the planning stage(s) for each, municipal garage retrofit,” noted Mr. Dunham. “The NES system provides a level of assurance that the health and safety of all those in the garage are protected while holding energy consumption in check.”

Furthermore, NES technology enables the City & County of San Francisco adhere to stricter energy efficiency and health and safety standards imposed by the State of California for enclosed, commercial garages.

NES commissioned its garage DCV system at the Sutter-Stockton garage in August 2016, and it’s presently monitoring / data logging energy consumption there. The same holds for the Japan Center Garage, where NES commissioned its system in early March 2017.