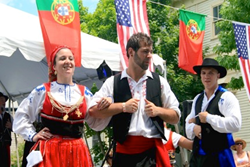 Nothing says summer like the crack of a freshly steamed lobster, the chill of a locally brewed beer and the feel of the sand between your toes at the 70th annual Portuguese Festival in Provincetown, MA June 22-25. The resort fishing village is a true melting pot of people who are equally at home hauling in their catch from local waters as they are singing and dancing to the music of their heritage. Each year, the festival brings together the diverse population of residents and visitors as they engage in a weekend-long celebration of culture and community.

The festival features a Portuguese soup tasting for $7, fado and samba music, Portuguese writers, poets, and dancers, and a lively parade through town. On Sunday, catch the 70th annual Blessing of the Fleet, where crowds gather to watch the procession of elaborately decorated boats receive a blessing from the Bishop. Join the festivities—eat, play, and celebrate nearly 200 years of Provincetown’s Portuguese heritage.

The festivities begin Thursday, June 22 and will run morning to night through Sunday, June 25. From the foodie to the dancer, there is something for everyone! The Seamen’s Bank Tent opens on Friday for the Lobster Bake (tickets $30). On Saturday, see the tent transform into a Portuguese food court, filled with traditional delicacies for the authenticity-seeking foodie. Then dance the night away to live samba music under the stars in Portuguese Square.

“The festival is appreciated not only by the people in town but the families and generations who have left. It’s an honor for me and for the 100 volunteers of the Portuguese Festival to serve them,” said Murphy.

Keep the kids entertained with tons of kid-friendly festival events; from comedy shows to music, and games, it’s fun for the whole family! For the budget-minded, check out the festival’s wide variety of free or cheap events, including readings from Portuguese writers and poets, Portuguese dancers performing traditional routines, and all you can eat affairs starting at $5.

Join the Provincetown Portuguese Festival in celebrating 70 years of the Blessing of the Fleet, June 22-25.

About Provincetown
Provincetown, Massachusetts is a true melting pot. Located on the tip of Cape Cod, Provincetown boasts beautiful beaches, Zagat-rated restaurants, art galleries and charming shops. A top LGBTQ destination, this open-minded community celebrates individuality and freedom of expression. Provincetown has a rich creative history and is home to one of the oldest art colonies in the country. The diverse population of artists, sailors, fishermen, authors, and more, makes Provincetown unique. From Carnival in August to Women’s Week in October, Provincetown is thriving 365 days of the year.