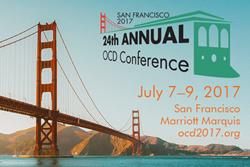 Annual OCD Conference to be held in San Francisco

OCD is a mental disorder often overlooked by society, leaving many to figure out how to cope with the challenges of this often debilitating condition on their own.

More than 1,600 people will attend the International OCD Foundation's 24th Annual OCD Conference, which will be held this summer in San Francisco. Running July 7 - 9 at the San Francisco Marriott Marquis, the OCD Conference is the world's largest event dedicated to obsessive compulsive disorder (OCD) and related disorders, including hoarding disorder (HD) and body dysmorphic disorder (BDD). OCD is a highly stigmatized and misunderstood condition and many of those affected lack adequate resources. The conference aims to provide education and support for the diverse OCD community.

Obsessive compulsive disorder affects some 3 million people in the United States, including children and teens. Though OCD has no cure, its symptoms can be effectively managed through cognitive behavioral therapy and medication.

The Annual OCD Conference provides a place for the OCD Community to share the latest news and research, as well as to find support and inspiration. The Conference features more than 100 presentations, workshops, and evening activities, as well as nearly two-dozen support groups. Presenters include some of the most experienced and knowledgeable clinicians and researchers in the field, as well as individuals with OCD and family members who graciously share their stories.

“OCD is a mental disorder often overlooked by society, leaving many to figure out how to cope with the challenges of this often debilitating condition on their own,” said Jeff Szymanski, PhD, executive director of the International OCD Foundation. “Our goal with this year’s conference is to not only shed light on the gravity of OCD, but also cultivate hope among the OCD community by giving people tools to find effective treatment and showcasing stories of people who have fought this battle and overcome.”

The 2017 Conference keynote will feature the world premiere of the film UNSTUCK, as well as a Q&A session with the film's creators and child participants. UNSTUCK shines a spotlight on kids and teens with OCD.

In addition to the keynote, each year the Annual OCD Conference recognizes individuals who have made meaningful contributions to the OCD community over the years.

This year Corey Hirsch, a former Vancouver Canucks Goalie, and now an outspoken OCD advocate, will receive the IOCDF illumination Award, an accolade given annually to influencers whose work accurately and respectfully represents OCD and related disorders in an effort to raise awareness and understanding.

The Outstanding Career Achievement Award will be awarded to Dr. Susan Swedo, who has made significant contributions to research on pediatric OCD, and has contributed greatly towards identifying factors that influence the onset of OCD and related disorders.

Former IOCDF Spokespeople, Elizabeth McIngvale and Jeff Bell, will jointly receive the Patricia Perkins IOCDF Service Award for their achievements and years of service to the IOCDF and the OCD community. The IOCDF will also present Chrissy Hodges with the Hero Award for her efforts to continuously advocate and raise awareness for OCD and related disorders.

Registration for the conference is open to all and continuing education credits are available to qualified professionals. For more information and to register, visit ocd2017.org or call (617) 973-5801.

About the International OCD Foundation
The mission of the International OCD Foundation (IOCDF) is to help individuals with obsessive compulsive disorder (OCD) to live full and productive lives. Our aim is to increase access to effective treatment, end the stigma associated with mental health issues, and foster a community for those affected by OCD and the professionals who treat them.