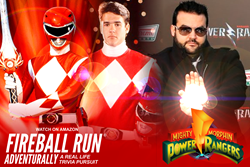 ...by just being on this show I can help a missing child.

Synopsis: Fireball Run® is the real story of road warriors in a legendary competition across America in search of obscure historic artifacts, under-discovered places, and extraordinary experiences. And it’s all for bragging rights, a greater cause, and a plastic road sign.

Available on Amazon, Fireball Run is a 26-episode adventure series which inspires viewers to explore the United States. Unlike Reality TV, Fireball Run, a Factual series, chronicles authentic experiences and notable places. To win the life-sized trivia game, teams take the road less traveled in an epic quest to re-discover America while also aiding in a massive effort to recover missing children.

"When I first heard about Fireball Run I was intrigued by the unique adventure," said Austin, who first learned about the series through his PR agent, Zach McGinnis. He continued, "But when I learned that by just being on the show I can help a missing child, well, that was it for me. My mighty fans and I are ready to get the word out on on little Alan."

While exploring America like never before, each team is provided 1,000 posters featuring a particular missing child to distribute along the 1,200-mile journey. Austin has been assigned 6-year-old Alan Rodriguez, who was last seen in Cedar Park, Texas on Sep 2, 2016. Fireball Run’s Race to Recover America’s Missing Children awareness campaign for The Child Rescue Network, a Florida based 501c3 charity, has aided in 49 recoveries since 2007.

The nine-day, forty-team, point-based competition is filmed live in different cities. Using just clues, contestants find locations where they are to take part in a rare experience or unique challenge. Daily competition ends to a live event attended by spectators and media. Although the trophy is a plastic road sign, the real prize is the journey.

Fans are encouraged to vote for their favorite contestant team at FireballRun.com, and to follow and interact with Austin St. John & Fireball Run on Facebook #AustinStJohn #FireballRun and Instagram #austin_st_john #fireballrun