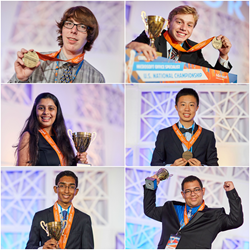 The winners of the 2017 Microsoft Office Specialist U.S. National Championship have been announced by Certiport, the leading test delivery solution provider for the global workforce and academic markets.

The champions topped more than 320,000 total entrants and 124 finalists at the event in Orlando, Florida. The first-place winners will now head to Anaheim, California for the MOS World Championship from July 30 – August 2, 2017.

The MOS U.S. Champions are as follows:

“Placing first at the MOS U.S. Championship is a dream come true to me,” said winner Forrest Liu. “I know the Microsoft Word certification I earned to qualify for the competition will help me in the future as I add it to my resume, as well as for writing professional letters, school essays and eventually on the job.”

After besting 320,000 students who earned a passing score on an eligible MOS Exam in the qualifying round, 124 finalists were given a printed copy of a document, spreadsheet or presentation to recreate, along with printed instructions and digital assets. They were scored according to the accuracy of the re-creation. The champions in each program, along with a chaperone, have won a trip to participate in the 2017 MOS World Championship in Anaheim, California. Photos of the winners and the competition can be found here.

"Every year the MOS U.S. National Championship grows as students discover the value of MOS certification to help them prepare for college and career,” said Aaron Osmond, general manager, Certiport. “Earning validation from Microsoft allows students to stand out from the crowd and prove that they have valuable, on the job skills.”

Certiport anticipates more than 150 finalists from more than 50 countries at the MOS World Championship, where students will again participate in a unique competition exam in their track. Six winners will receive cash prizes, medals and the title of Microsoft Office Specialist Word, Excel or PowerPoint World Champion.