Businesses report it's getting harder to fill jobs, according to a new survey conducted by Express Employment Professionals. 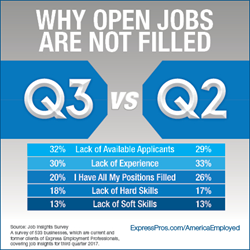 If the economy continues to grow, these challenges will not subside, and it will be up to business leaders and elected officials alike to find ways to bring more people into the American workforce.

In a survey of 533 businesses, respondents were asked, “How easy is it for you to recruit and fill positions?”

Almost one quarter, 24 percent, said “very difficult,” and another 46 percent said “somewhat difficult.” In total, 70 percent reported some level of difficulty, the highest percentage since the last quarter of 2016.

Respondents were also asked for the “primary reason that your open jobs are not filled.”

“There should be little doubt at this point that we have a tight labor market and are approaching full employment, at least by conventional measures,” said Bob Funk, CEO of Express, and a former chairman of the Federal Reserve Bank of Kansas City. “As a result, it’s not surprising to see companies lamenting the difficulty of finding talent. Employers would be well-advised to consider new recruitment and retention strategies. If the economy continues to grow, these challenges will not subside, and it will be up to business leaders and elected officials alike to find ways to bring more people into the American workforce.”

The survey of 533 businesses, which are current and former clients of Express Employment Professionals, was conducted in June 2017 as part of the America Employed campaign to gauge respondents’ expectations for the third quarter of 2017. Previous surveys were conducted to cover hiring trends of the quarters indicated.
***
If you would like to arrange for an interview with Bob Funk to discuss this topic, please contact Sheena Karami, Director of Corporate Communications and PR, at (405) 717-5966.