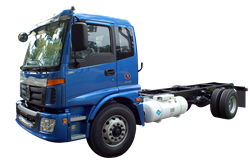 Our major task at this point is to secure working capital to escalate Alkane truck production to meet the burgeoning demand resulting from these key international business development initiatives.

Bob Smith, CEO of Alkane Truck Company, stated: “We are very pleased with the interest level we are seeing from government officials, potential dealers and fleet customers in our EPA/CARB-certified and DOT-compliant, Class 7 propane-powered delivery trucks. Favorable fuel economics and the global interest in transitioning to alternative-fueled vehicles to reduce unhealthy greenhouse gas emissions from aging diesel engines are the major market drivers. Alkane products are perfectly positioned to see substantial growth in the coming quarters and years to meet this clean energy demand.”

United States—VW Environmental Mitigation Trust Fund. In October, 2016, the U.S. government granted final approval of a $14.7B settlement against Volkswagen (VW) for equipping more than 500,000 of its diesel vehicles with software designed to cheat U.S. vehicle emissions tests in violation of the Clean Air Act. Of that amount, $10B will be spent on vehicle buy-backs, $2B on zero-emission infrastructure investments, and $2.7B will be allocated to establish the Environmental Mitigation Trust to fund projects that reduce diesel-related emissions. Each state in the U.S. has been allocated a certain percentage of the fund. In anticipation of the release of funding by January, 2018, states are currently entertaining project ideas. According to the Trust guidelines, these funds may be used to upgrade or replace diesel-powered vehicles with newer and cleaner burning engines; since Alkane products qualify for consideration under the funding guidelines, the company is actively lobbying state mitigation trust fund managers to appropriate monies to replace aging diesel-fueled trucks and fleets with its new propane-fueled delivery trucks.

Canada—Quebec Province. As part of its 2030 Energy Policy, the Government of Quebec Province has made it a priority to establish the province as a North American leader in the areas of renewable energy and energy efficiency.

Quebec’s Ecocamionnage Program provides fleet operators with financial incentives of up to $30,000 in eligible expenses related to the acquisition of each alternative-fueled vehicle. The Quebec propane industry has recently reached out specifically to Alkane to bring our Class 7 LPG truck line to the region. Business trips and meetings have been scheduled to identify and establish dealers in Quebec in an effort to introduce the Alkane LPG Class 7 north of the border.

Canada—Ontario Province. The Canadian Natural Gas Vehicle Association, Ontario natural gas utilities, and the Ontario Trucking Alliance are working with the Ontario Ministry of the Environment and Climate Change (MOECC) to establish guidelines to distribute $270M Canadian dollars over the next four years for alternative fuel applications. Of the total, $100M is earmarked for new fueling stations, $170M for alternative fuel vehicles. The program is expected to launch in late 2017 and be fully implemented in 2018. Alkane is preparing to set up its new dealer network in Toronto and other key cities in the province to sell its Class 7 LPG trucks and, when adequate capital can be secured, Alkane will launch its Class 8 alternative-fuel product line.

Mexico—Favorable Fuel Economics and Reducing Diesel-Related Emissions. In January 2017, the Mexican government eliminated certain fuel subsidies for diesel and gasoline—resulting in an immediate 15%-20% increase in diesel fuel prices. This action created over a 50% favorable price spread between higher diesel prices and lower propane and natural gas prices. In addition, continued degradation of air quality and smog alerts have motivated Mexican federal and city officials to address their environmental issues. During 2016, the Mexican Environmental Authority began implementing mandated cutbacks in daily deliveries to major cities for fleets using either gasoline- or diesel-fueled trucks; if alternative-fueled trucks are used, the delivery ban is lifted. This double-jeopardy loss in weekly delivery revenue as a result of using diesel trucks and the higher cost of diesel fuel itself has caused a wave of interest in alternative-fuel vehicles—especially in vehicles like Alkane’s Class 7 LPG truck, whose cab-over design is perfect for tight inner-city deliveries. Alkane has selected a Mexican alternative fuel company as its lead dealer—currently taking steps to register Alkane’s products for sale in Mexico.

Mr. Smith concluded: “Our major task at this point is to secure working capital to escalate Alkane truck production to meet the burgeoning demand resulting from these key international business development initiatives. We appreciate your investor interest and look forward to answering any questions you may have.”