Out Now: FATUM featuring Angel Taylor, “On My Own” (Armind)

“On My Own” is the latest and most important single by FATUM since their GRAMMY nomination. 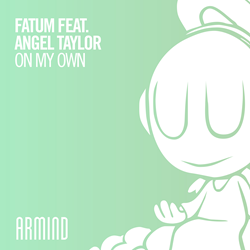 FATUM ft Angel Taylor, "On My Own" (Armind) - artwork

FATUM featuring Angel Taylor’s “On My Own” is positively poised to be the next big summertime hit. This is EDM at its best.

Addictive. Immediate. Exceptional. The GRAMMY-nominated electronic dance music (EDM) group, FATUM, delivers its latest single and the song is destined to be a summertime hit. FATUM featuring Angel Taylor’s “On My Own” (Armind) is out now.

The Radio Edit of “On My Own” distills the essence of uncomplicated glee into a single accessible, feel-good song. Angel Taylor’s insanely pretty vocals meld perfectly with FATUM’s melodic, chiming synthesizers. The captivating bassline keeps the energy propelling forward on this pop song as FATUM proves to be as ripe for American FM radio as ever. (The Chainsmokers, move over.) Young festival-goers will fall instantly in love with the syncopated rhythm that enters halfway through the song. Play this song out loud, twice, and it’s guaranteed to become an earworm. Closing one’s eyes, it’s easy to imagine this tune sticking in one’s memory all summer long. Here’s the soundtrack for cruising down the highway with the top down, festival banners fluttering in the warm breeze. “On My Own” is a song conjuring feelings of love as a thrill ride. It’s a buoyant record that embodies the spirit of young love. The Club Mix of “On My Own” is distinguished by a longer intro and outro that’s tailored for professional DJs. FATUM featuring Angel Taylor’s “On My Own” is positively poised to be the next big summertime hit. This is EDM at its best.

FATUM (pronounced “FATE-um”) is the GRAMMY-nominated American electronic dance music act consisting of Bill Hamel, Chad Newbold, Bruce Karlsson and Daniel Davis established in 2015. With releases on leading record labels, Anjunabeats, Armada Music, Black Hole, Ultra Music, Big Beat/Atlantic and Ride, the group has made a considerable impact on the global dance music scene. With support from fellow artists, Calvin Harris, David Guetta, Armin van Buuren, Above & Beyond, The Chainsmokers, Kaskade, Markus Schulz, Ferry Corsten and others, FATUM has quickly established a toehold in the international dance music firmament. FATUM’s remix of “Hold On” featuring singer/songwriter, Jes Brieden, earned the group a GRAMMY nomination for “Best Remixed Recording, Non-Classical” in 2016. As a live act, FATUM can be seen performing at major festivals and nightclubs including HAUS Nightclub in New York City’s upscale Tribeca/SoHo neighborhood. FATUM has performed live as part of the Anjunabeats-brand of events including at Escapade Festival in Ottawa, Canada. In 2017, FATUM won the first annual ‘Global Journey DJ Battle’ presented by Brussels Airlines in partnership with Tomorrowland. The energy FATUM brings to its progressive-sounding music is undeniable.

Listen to the FATUM featuring Angel Taylor’s “On My Own,” here: https://ARMD1365.lnk.to/OMO