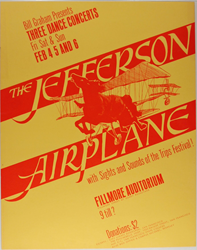 We're hoping our $20,000 reward brings at least one seller out of the woodwork.

A $20,000 reward has just been announced by Psychedelic Art Exchange for anyone that has an authentic, undamaged original first printing of the Bill Graham BG-1 Concert Poster with Peter Bailey artist credit. The concert poster promotes three days of performances by the Jefferson Airplane at the Fillmore Auditorium February 4, 5 and 6,1966.

"We recently auctioned off a copy of the BG-1 concert poster with Peter Bailey credit that generated tremendous interest around the world," explained Scott Tilson of Psychedelic Art Exchange, the auction house offering the reward. "Now we have a few other collectors begging us for this important concert poster. We're hoping our $20,000 reward for an undamaged copy brings at least one seller out of the woodwork. Collectors need to know we would be thrilled to acquire this special poster and we're willing to pay a world record price to get it," explained Tilson.

The BG-1 Jefferson Airplane Fillmore Auditorium concert poster has special historical significance because it's the very first created in the Bill Graham Fillmore Auditorium concert poster series. Just 500 posters were originally produced and just 150 credit the artist, Peter Bailey. Just a small fraction of the posters that were originally produced are known to exist today.

If anyone has a BG-1 Jefferson Airplane concert poster they wish to sell, or any other Bill Graham Fillmore Auditorium concert posters from 1966, call Scott Tilson at 435-659-1660 or email Scott(at)ConcertPosterGallery(dot)com