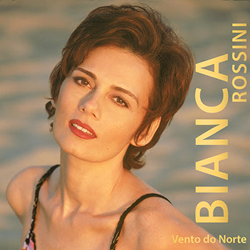 "Vento do Norte is a triumph, Bianca Rossini’s most fully realized and enrapturing release to date." - Jeff Tamarkin, music journalist

Brazilian singer-songwriter Bianca Rossini, on her new, critically acclaimed album Vento do Norte, masterfully establishes that there is a great deal of life to be found in new bossa nova music.

"Bianca Rossini’s voice is pure, expressive, playful. Her songs poetic, richly grounded in generations of traditions for which she clearly has deep affection, not to mention expertise and facility. The performances, lithe and life-filled, match all that in every note, every nicely turned phrase. But what stands out most on Vento de Norte is her honesty, both emotional and artistic. At root of this is her deep love for the golden age of the samba and bossa nova of her native Brazil — you don’t cite Ipanema in a song title (the silky “Ipanema Paraiso”) without wanting to evoke that era. But she’s not ignoring or dismissing all the experiments and fusions of those styles that have happened over the years. Rather, she’s renewing the spirit that inspired all that in the first place, and has so profoundly inspired her. She sings of amor (“Doce Amor” — “Sweet Love”) and the flirtatious, tantalizing games we make of it (“Tic Tac do Amor”). But what she really wants is for us to love this music, and all she brings to it, as much as she does. And she succeeds. Delightfully." - Steve Hochman, music journalist

"When I conjure up perfect bossa nova in my mind, it sounds very much like Bianca Rossini’s elegant Vento do Norte. Bianca’s vocal delivery is sweet and sunny, the arrangements sway and swing entrancingly, and the songs stay with you long after the final notes fade away. Each track is a gem, luxuriant, gleaming and intimate, imbued with timeless traditions and ingenuity. Vento do Norte is a triumph, Bianca Rossini’s most fully realized and enrapturing release to date." - Jeff Tamarkin, music journalist

Among the highlights of Vento do Norte are the gentle love ballad “Doce Amor,” “Ipanema Paraiso” (featuring the tenor of Jimmy Roberts), “Why I Smile,” the catchy melody of “Tic Tac do Amor,” and “Meu Sonho,” a slower piece fully displaying the beauty of Bianca’s voice. Joined by several rhythm sections with either Roberts, Rawlins, Berglas, Gilutin or Mark Nilan on keyboards, Bianca Rossini stakes out her claim as one of the finest bossa nova singers on the scene today, and one of its most important songwriters.

“Vento do Norte manages to be both driving and tender all at once. That intimacy is what sets Ms. Rossini apart from many bossa nova vocalists – all emotion, never indifference." - Doug Boynton, Girl Singers

Vento do Norte is being released by Apaixonada Music and BDM Records, and is available worldwide at http://www.biancarossini.com, iTunes, Amazon and Spotify.

Born in Rio de Janeiro and currently based in Los Angeles, singer, songwriter Bianca Rossini has had great success in several different fields. Bianca has been performing since the age of three, and she moved to the United States as a teenager. Bianca attended the University of Maryland and George Washington University as a Dance and Theater Major, and studied at the Washington School of Ballet. Bianca worked as a print and runway model in Milan, Rio, New York and Washington DC. Bianca landed several national commercials, music videos, and her extensive television and film credits include Moon Over Parador, Bad Influence, Mobsters, Chicago Hope, The Sentinel, Martial Law, and The Brainiacs. In addition, she composed music for Chicago Hope and The Sentinel. Bianca also choreographed Moon Over Parador, The Sentinel and several music videos. Bianca is a poet and an author and has published 3 books: Love in Black and White, a collection of poems with art by the most popular and influential contemporary landscape photographer Michael Kenna; A Brazilian Heart – Rubies, Murder, Love and Other Poems is comprised of love poems with art by international artists, written in English and in Portuguese; Julia – Confessions of a Brazilian Super Model is a semi-autobiographical tale based in the years Bianca was an international model. For more than a decade she produced and hosted The Bianca Rossini Show, a weekly cable television talk show seen around the country. Her magazine column about the arts in Hollywood was featured in several lifestyle magazines in Los Angeles and online. Bianca's newly released album Vento do Norte follows her internationally acclaimed albums, Meu Amor and Kiss of Brasil, and singles, Return to Brazil and Cosmopolitan Girl. Bianca’s music has been featured on more than 100 jazz radio stations in 15+ countries, including the United States, Europe and South America. Bianca’s music is number one on Pandora's Bossa Nova Radio. On Spotify, Bianca’s songs have been streamed more than one million times.