The Lung Cancer Mutation Consortium at the University of Colorado Cancer Center reports this week in the journal Cancer that 24 of 920 patients (3 percent) with advanced-stage lung cancer had mutations in the gene HER2. 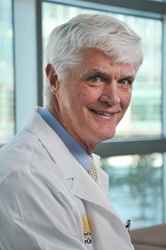 The question remains: What would the outcomes have been for these patients if they had gotten HER2-directed therapy?

The Lung Cancer Mutation Consortium at the University of Colorado Cancer Center reports this week in the journal Cancer that 24 of 920 patients (3 percent) with advanced-stage lung cancer had mutations in the gene HER2. Seventy-one percent of these patients were never-smokers, with a median age of 62. The gene HER2 has been known as a breast cancer driver, with therapies approved to target HER2 mutations in this setting. Now ongoing clinical trials are evaluating the use of HER2-directed therapy against lung cancer testing positive for the mutation. By identifying a significant population of HER2+ lung cancer patients, the current study demonstrates the need for these therapies.

“In this study, outcomes for HER2-positive lung cancer patients treated with conventional therapies were similar to outcomes for HER2-negative patients treated in the same way. But the question remains: What would the outcomes have been for these patients if they had gotten HER2-directed therapy?” asks Paul Bunn Jr., MD, FASCO, distinguished professor at the University of Colorado Cancer Center and James Dudley Professor of Lung Cancer Research at the University of Colorado School of Medicine.

“These treatments seem to have activity, but there just aren’t enough patients to know for sure whether HER2-directed therapy is better than giving chemotherapy, or if one HER2 treatment is better than another,” Bunn says.

The gene HER2 is closely related to known lung cancer driver EGFR. Both genes code for proteins that function as growth factor receptors, meaning they sit on the surface of cells and, when activated, can spur the rapid cell growth that is a hallmark of cancer. Researchers and physicians have shown success treating EGFR lung cancer, for example with EGFR inhibitors gefitinib and erlotinib. Previous work at CU Cancer Center shows these drugs are especially useful against lung cancers that over-express both EGFR and HER2, implying that in addition to targeting HER2-positive lung cancers with drugs approved to treat HER2-positive breast cancers, there may be a role for HER2 inhibitors in HER2 cancers, perhaps both breast and lung.

The use of HER2 drugs may also need to be refined based on the criteria used to define HER2 dependence.

“Sometimes the criteria for HER2 positivity is a high level of HER2 protein, sometimes it’s over-expression of the HER2 gene, and sometimes it’s high HER2 copy number. We don’t know if some HER2 drugs work better than others in these settings,” Bunn says.

Ongoing clinical trials hope to answer many of these outstanding questions. For example, HER2 inhibitors neratinib and pyrotinib, the monoclonal antibody trastuzumab, and also antibody-drug conjugates aimed at HER2 are currently in trials (clinicaltrials.gov search terms “lung cancer” and “HER2”).

For now, the current study shows that a significant population of lung cancer patients with HER2 mutations exists. Ongoing clinical trials will define how to best treat this population.