A new study by Queendom.com and PsychTests.com reveals that Millennials are less scrupulous than Generation X and Baby Boomers. 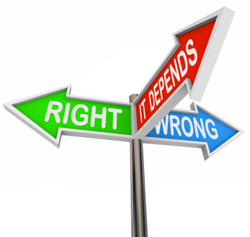 Of Millennials, Generation X, and Baby Boomers, it’s the youngest generation that is less likely to be honest.

Millennials seem to feel that honesty, morality, and truth are gray areas, not strictly black and white.

It hasn’t been easy for Millennials. They’ve been labeled as selfish, self-absorbed, apathetic, and over-indulged. There are even courses online to help managers motivate and supervise Millennials, as if they were wild creatures newly introduced into the ecosystem. Recent research from PsychTests also indicates that compared to Baby Boomers and Generation X, Millennials have a more lenient attitude toward dishonest behavior; however, they still uphold relatively high moral ground.

Conscientious individuals are productive and responsible. This particular trait is frequently associated with professional success, job satisfaction, and workplace integrity.

Remorsefulness reflects the degree to which a person feels bad for committing a transgression, like lying, rule-breaking, theft, or other unscrupulous behaviors. Theoretically, the more regret a person feels, the lower his or her likelihood of committing the same transgression in the future.

It’s one thing to have morals and principles – standing by them is where the challenge really lies. Individuals who possess value integrity will stand by their code of ethics, even if they are pressured to do otherwise.

A person who is trustworthy can be relied on to keep his or her word. Even in situations where they could easily get away with a misdeed (e.g. because they are not being supervised), trustworthy individuals are almost always able to resist the temptation to act dishonestly.

While sticking to the same job until retirement is rather uncommon these days, most companies still consider loyalty a valuable trait. Job-hopping is a major employer pet peeve, as hiring and training a new recruit is costly. Employees who are loyal are dedicated to the company’s success and committed to doing their job well.

Discretion is particularly important in jobs in which staff members have access to sensitive information. A breach of confidentiality could result in serious legal consequences.

Empathy isn’t just for the greater good of humanity. On a business level, it allows companies to better understand the needs of their customers and it breeds a more collaborative work environment.

“It’s important to keep in mind that while the differences in scores among Millennials and the other two generations were statistically significant, they were not glaringly large,” explains Dr. Jerabek, president of PsychTests. “Overall, Millennials are quite honest. They may just feel that honesty, morality, and truth are gray areas, not strictly black and white.”

“Some people might look upon these study results as proof that Millennials are deleterious troublemakers. However, progressive Millennials of today are behaving much like progressive Baby Boomers did in the 60’s and 70’s. Baby Boomers birthed the feminist movement, which sought to break down barriers and dismantle laws that discriminated against women. When they were about the same age as today’s Millennials, the streets were rife with student activists fighting for equality for all cultures and sexual orientations. Essentially, they behaved in ways that could have been considered rebellious and unlawful. That’s not all that different from Millennial activists, who march to call attention to climate change, who protested after the US elections, and who have harnessed the power of social media to get word out about causes they believe in. Just like previous generations, Millennials are generally honest and have good values, but they believe that some rules can be broken if it’s for the greater good.”

Professional users of this test can request a free demo for the WINS (Work Integrity Screening) or WINT - R3 (Work Integrity Test - 3rd Revision) or any other assessments from ARCH Profile’s extensive battery: http://hrtests.archprofile.com/testdrive_gen_1

When it comes to integrity, Millennials are not always willing to take the high road.Here’s where these three generations differ in terms of honesty.