“Covert Awakening” from Christian Faith Publishing author Julianne Hale follows ISD strategist Walid as he journeys from terrorist bent on revenge to redemption. Walid wanted revenge after narrowly escaping a U.S. airstrike, but a group of former special forces rebels in the underground church quickly start to change his heart. 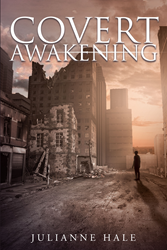 “Covert Awakening”: Walid’s spiritual journey from Islamic terrorist to redemption. “Covert Awakening” is the creation of published author, Julianne Hale, a consultant for the Intelligence Community. For more than ten years, she has served as a policy and counter-terrorism expert focusing on the Near East region. Julianne has written hundreds of reports for the US government analyzing world events, terrorist operations, and radical Islamic ideology. She has received a number of national intelligence and impact awards from several agencies for her work. She has also collaborated with more than fifteen nations and traveled to three continents as part of her work. Her passion is developing and promoting solutions to help people caught in global conflict zones. She is currently partnering with international ministries to bring both humanitarian aid and the gift of God’s love to the people of the Near East region.

After narrowly escaping a U.S. airstrike in Tunisia, the lead strategist for the terrorist group ISD, Walid, wants revenge. ISD’s emir tasks Walid to lead one of several critical attacks across the globe as part of their broader mission to usher in the Messiah. When Walid meets a diverse team of former special forces rebels in the underground church, however, he starts to see his group, and radical Islam, for what it really is.

Instead of going on the run, Walid chooses to act as a double agent while he works with his new team to fracture ISD from within. His worst nightmare becomes a reality after he fails to prevent ISD’s first attack on the United States. Nothing short of a miracle will prevent a cataclysmic domino effect. World leaders must quickly learn who they can trust as alliances are built and world destruction looms.

For additional information or inquiries about “Covert Awakening”, contact the Christian Faith Publishing media department at 866-554-0919.