A new feature from lead-generation software platform PX will enable users of their platform to easily analyze and track return on investment for traffic and lead sources. The new tool will assure greater transparency and simplify decision-making for advertisers. 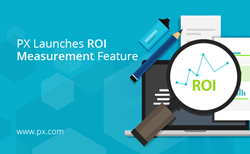 Advertisers now can have direct visibility into which lead sources are generating leads that become customers. -Jeff Deisner, Executive Vice President of PX

PX, whose lead generation platform currently handles over 50 million transactions a month, is releasing a new ROI measurement tool called the ‘Disposition Engine’. The new tool offers advertisers the ability to upload any sales and lead-nurturing data related to the leads they received from PX, such as contact ratio sales conversion, conversion of lead to appointment, etc. Once uploaded, this data is then used to calculate the return on their investment per lead and per traffic source.

The ‘Disposition Engine’ calculates the true ROI for each lead source, which allow advertisers to optimize their marketing campaigns. Beta testing of the new tool resulted in significant improvements in ROI, offering advertisers far greater transparency and insight. With intelligent, data-backed modeling, the tool serves as a powerful decision-making aid for any campaign manager.

Based on the ‘Disposition Engine’s’ successful beta testing, PX is also incorporating the disposition data into its unique lead-scoring algorithm. Both lead and source scoring algorithms are automatically adapted based on disposition data received. This provides greater clarity and better correlation between quality and pricing in the ever-changing lead generation market. This allows advertisers to scale up their lead generation activities and improve ROI using the PX platform.

PX has been an advocate for greater transparency in the lead generation industry. With its new ROI-tracking features, the PX platform is evolving to meet the demands of its advertisers for a clearer overview and a better understanding of what their investment will bring them. “The ‘Disposition Engine’ connects the result of advertiser’s sales efforts on a given lead with the investment made on that lead. Advertisers now can have direct visibility into which lead sources are generating leads that become customers.”, says Jeff Deisner, Executive Vice President of PX.

As more and more marketing operations turn to big data and marketing metrics to leverage performance, the ‘Disposition Engine’ will be a welcome addition to the successful PX platform.

PX, part of ReviMedia group, started as an in-house lead generation platform in 2010 and has grown into an automated, feature-rich SaaS solution, with over 50 million leads generated in more than ten verticals since 2014. With its fast-growing team which currently boasts 22 developers, PX is headquartered in Newport Beach, California.