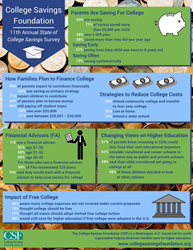 We are pleased to see a strong preference for savings among a generation of parents who grew up with 529 college savings plans being available to American families -- Richard J. Polimeni, Chair of CSF

With 529 college savings plans in existence for over 20 years, parents today are embracing saving as their favored way to pay for their children’s education, and 529s as their preferred savings vehicle. In recognition of College Savings Month, the College Savings Foundation is releasing the results of its 11th Annual State of College Savings survey of parents across the country, finding that parents, especially from their young 20s to mid-40s, purposefully and regularly save for their children’s college education.

“We are pleased to see a strong preference for savings among a generation of parents who grew up with 529 college savings plans being available to American families,” said Richard J. Polimeni, Chair of CSF, a leading nonprofit helping American families save for higher education.

Among all respondents, 83% are saving – an all-time high in the eleven years of the survey’s history. Of those, 71% had saved more than $5,000 per child and 36% of savers said 529 college savings plans were their primary college savings vehicle.

Respondents seem to be focused on college saving even at a time when “free college” has become a popular topic of discussion. In a series of new questions this year about the concept of free college, 80% said they would still save for higher education if free college were adopted across the United States.

Perhaps part of that reasoning is awareness of related costs beyond tuition and fees. Understanding there are limits to free college proposals, 60% said they were aware many college expenses are not covered under current proposals.

Results for other questions concerning free college showed that 75% of respondents thought college should be free; and 77% thought all states should adopt limited free college tuition.

College Debt a Motivator to Save for Children’s Education

“While many parents grapple with their own student debt, they are actively saving for their children’s future college expenses,” Polimeni added. 90% of parents who carry student debt said it made them consider other ways of financing college. Saving was the most prevalent.

Parents are also looking at ways to reduce college costs for their children. Top strategies are attending community college for two years and transferring to a four-year college (29%), living at home (22%), and attending a state school (15%).

Parents and young people seem to be on the same page. 71% of parents expect their children to contribute to college costs. CSF’s 2017 How Youth Plan to Fund College survey found that 87% of high school students have talked to their parents about their involvement in funding college.

79% of all respondents, and a full 88% of the 21-30 year olds, said they would work with a financial advisor if they knew they could get help with college saving.

This time-tested strategy works: 38% of all respondents had saved more than they had one year ago.

Over half – 51% – knew investing in 529s could also fund their own educational expenses such as graduate school.

Respondents also view college as more than the traditional four-year experience: 63% said, when considering college options, they think of vocational and career schools in the same way as public and private schools.

In fact, 28% of parents said their child had considered not going to college at all – of which 48% decided to look at other options. Among the reasons they considered not attending college were they didn’t want their parents to bear the burden of college costs and they believe their career goals could be achieved without college.

The CSF State of College Savings survey of parents was conducted through survey monkey with an audience from philipgarland.com LLC of 800 parents across the country and evenly divided across income levels.

The College Savings Foundation (CSF) is a Washington, D.C.-based not-for-profit organization helping American families save for higher education. For more information and an infographic on these findings, please go to http://www.collegesavingsfoundation.org