Foresight Institute, a leading think tank, research, and public interest organization focused on molecular manufacturing and other transformative technologies, announced the 2017 winners for the prestigious Feynman Prizes, named in honor of pioneer physicist Richard Feynman, for experiment and theory in nanotechnology. “The problems of chemistry and biology can be greatly helped if our ability to see what we are doing, and to do things on an atomic level, is ultimately developed — a development which I think cannot be avoided.” - Richard P. Feynman, 1959 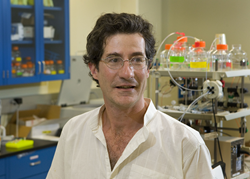 Foresight Institute, a leading think tank, research, and public interest organization focused on molecular manufacturing and other transformative technologies, announced the winners for the 2017 Foresight Institute Feynman Prizes.These are given in two categories, one for Experiment and the other for Theory in nanotechnology/molecular manufacturing.

Professor Giovanni Zocchi received the Theory Prize for inventing a method (“nano-rheology”) for measuring stress – strain relations of soft nanoparticles with sub-Angstrom resolution and thereby discovering that enzyme mechanics is viscoelastic. Nano-rheology allows the exploration of conformational changes in enzymes from a materials science perspective. This includes the demonstration of nano-rheology as a biochemical assay. When enzymes bind small molecules, such as substrates or inhibitors, their mechanical susceptibility changes. This effect is easily detected by nano-rheology. The method can measure binding of small ligands, where existing label free methods such as the Biacore instrument fail. Nano-rheology thus emerges as a potential alternative to electronic and spin spectroscopies for certain bio-molecular assays.

Professor Shih was awarded The Experimental Prize. William Shih's contribution to nanotechnology is the total mastery of the design and synthesis of three dimensional DNA nanostructures. His work extended DNA origami from 2D to 3D - a breakthrough in the field. Shih entered DNA nanotechnology with a Nature article demonstrating the folding of a single strand of DNA; it was on the strength of this Nature paper that Shih got his position at Harvard. Thanks in large part to Shih's efforts over the last decade, programmable self-assembly of 3D DNA nanoshapes the size of a virus now is routine. His groundbreaking studies in Nature and Science that generalized DNA origami to solid three-dimensional structures were published in 2009.

Prof. Shih pushed the technique of DNA origami in many new directions that will make it much more practical, from an isothermal folding technique that allows origami to be made at room temperature to showing how DNA origami may be created using double-stranded DNA as the direct source of the long single strand. This latter method is extremely important because, thus far, DNA origami has been limited in size because the most available long scaffold has been the genome of the virus M13. The technique will allow much longer double-stranded DNA to be used and enable the creation of much larger DNA origami.

The Foresight Institute has announced that the winner of the 2017 Distinguished Student Award is Hai Qian a PhD student in Professor Ivan Aprahamian’s Lab at the Department of Chemistry at Dartmouth College in Hanover, NH.
Hai has been developing hydrazone-based fluorophores and photochromic compounds. To date, this research effort has led to 7 publications in leading peer reviewed journals.

Hai was the main instigator behind the development of these new systems, and so has contributed to the expansion of the toolbox available to the field of molecular switches and machines. Mr. Qian is currently working on using two-photon absorption to develop high density storage devices built in single crystals. This feat is possible because of the unique solid state emission switching capability these switches exhibit.