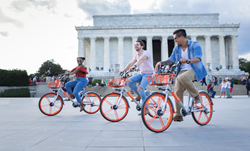 We look forward to working with more cities across the nation to make cycling the most convenient, affordable, and environmentally friendly transportation option for residents and tourists alike.

Mobike, the world’s largest smart bike sharing company, launches today in Washington D.C. with an initial placement of dockless bikes based in key downtown locations. The expansion – planned collaboratively with City leaders and planners – marks the company’s first foray into the United States and brings the total number of cities with a Mobike presence to over 180 in less than eighteen months.

The bikes are powered by unique high-tech features including smart-lock technology, non-puncture airless tires, bike status sensors and built-in GPS locators. Users simply download the Mobike app, find a nearby Mobike and scan its QR code to unlock and ride. Changes were made to the Bike to specifically serve D.C., including the shape of the bike itself and the addition of several gears.

“We are thrilled to call Washington D.C. Mobike’s first home in North America,” said Hu Weiwei, Cofounder and President of Mobike. “Mobike is committed to developing a global bike share culture by collaborating closely with cities, and the U.S. capital is key in achieving this. We look forward to working with more cities across the nation to make cycling the most convenient, affordable, and environmentally friendly transportation option for residents and tourists alike.”

Members of Washington D.C. Mayor Muriel Bower's Administration welcomed Mobike as D.C.’s first dockless bike share program. Unlike many American bike share programs, Mobike has no need for public funding. Mobike is also a pioneer in using GPS technology to leverage real-time trip and city data to better serve users and cities. The company uses data analytics to not only monitor the health of each bike and allocate their fleet across the city depending on traffic, weather and other variables – but also to support city planners, local businesses and authorities in a variety of smart urban planning projects.

“We are working with a number of cities across the country and are confident this successful pilot will be the first of many partnerships, allowing us to make cycling the most convenient and affordable choice for transportation all around America.”

The company officially launched its service in Shanghai in April 2016, and has since expanded its presence to 180 cities globally. The company now operates more than 5 million smart bikes, and supports over 20 million rides every day. As of August 2017, Mobike users have collectively cycled over 5.6 billion kilometers, equivalent to reducing CO2 emissions by more than 1.26 million tons, or taking 350,000 cars off the road for a year. In June 2017, Mobike received the WWF’s “Climate Solver Sustainable Urban Mobility Special Award” in recognition of the impact its innovative technology and promotion of sustainable transport.

Mobike is a re-imagination and delivery of the ultimate urban bicycle with innovations such as the chainless shaft transmission, non-puncture airless tires, a lightweight aluminum anti-rust frame, an enhanced and durable disk-brakes and an auto-inspired five-spoke wheel. These functional design elements result in a maintenance-free bike, with each Mobike’s lifespan estimated at 4 years of fix-free cycling. Each bicycle is connected to the Mobike IoT network via GPS-embedded smart lock; forming one of the largest IoT networks on the globe.

Mobike’s distinctive silver and orange bikes will be initially deployed at key downtown locations such as DC Metro stations, university campuses, and public parks. To use the service, users simply need to download the Mobike app, register, and scan the QR code on the bike. With Mobike’s proprietary smart-lock technology, scanning the QR code instantly unlocks the bike and allows the user to ride it away. To complete their ride, users need only to park the bike at any authorized bike parking areas near to their destination and manually close the lock on the bike.

The Mobike mobile app is now available for download in D.C. at the Android store and Apple app store.

Mobike is the world’s first and largest smart bike-sharing company. Its mission is to bring more bikes to more cities, using its innovative technology to make cycling the most convenient and environmentally-friendly transport choice for urban residents. Using specially designed bikes equipped with GPS and proprietary smart-lock technology, Mobike enables users of its smartphone app to find a bike near them, reserve and unlock it, all using their smartphones. After reaching their destination, the user parks the bike by the roadside and locks it, automatically making the bike available to the next rider.