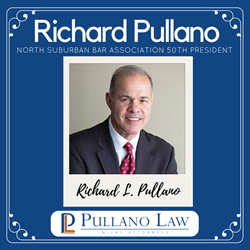 Pullano Law Offices is pleased to announce that founding attorney Richard L. Pullano has been selected to serve as President of the North Suburban Bar Association for 2017-2018.

Pullano Law Offices, a Chicago personal injury law firm, is pleased to announce that founding attorney Richard L. Pullano has been selected to serve as President of the North Suburban Bar Association for 2017-2018. Mr. Pullano was installed as the Association’s 50th President at the Installation and Award Dinner hosted by the NSBA at the North Shore Country Club in Glenview, IL, on September 13, 2017.

The North Suburban Bar Association is an organization of attorneys, judges, and professionals dedicated to the personal and professional development of its members and the betterment of the legal community of Chicago and the Northern Suburbs. The NSBA provides networking opportunities, Continuing Legal Education (CLE) courses, and referral services to its members, along with community outreach programs and events.

Mr. Pullano has been active with NSBA for many years and has served in various leadership capacities within the association. He was named the NSBA treasurer in 2013 and was elected as 4th Vice President the following year. As part of his involvement with the NSBA, Mr. Pullano has led CLE seminars and co-chaired the high school mock trial events in the local community.

Attorney Richard L. Pullano received his undergraduate degree from the University of Notre Dame in South Bend, Indiana, and went on to attend law school at DePaul University College of Law in Chicago. He earned his Juris Doctor in 1982, was admitted to the Illinois bar that same year, and went to work as a prosecutor in the Cook County State’s Attorney’s office. In 1987, he dedicated his career to helping injured victims seek justice.

Mr. Pullano is also active in the local community and has served on the Board of Directors for several Glenview youth sports organizations. He and his wife Candace have two children and live in the Chicago area.

Pullano Law Offices is a personal injury law firm located on North LaSalle Street in downtown Chicago. The firm is dedicated to helping those who have been injured seek full justice. The attorneys at Pullano Law Offices are prepared to meet with clients any time and place, and they know how to get results. The law firm has obtained millions of dollars in settlements and verdicts for clients and has become known for an uncompromising approach and a relentless work ethic.