This morning the UN Security Council unanimously adopted a resolution paving the way for an investigative team to collect evidence of war crimes, crimes against humanity and genocide in Iraq. This is an important first step in ensuring accountability for Daesh's crimes. 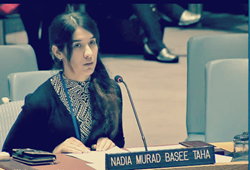 "Women and girls are the living victims of this genocide." - Sareta Ashraph

Today, the UN Security Council unanimously adopted UNSC Resolution 2379 (2017) on Daesh accountability, paving the way for an investigative team to collect evidence of war crimes, crimes against humanity and genocide in Iraq. Since 2014, Daesh has been perpetrating a genocidal campaign against the Yazidi and potentially other ethnic minorities in Northern Iraq but yet to date no perpetrator has been held accountable for genocide.

“The resolution today marks an important first step,” says Janet Benshoof, President of the Global
Justice Center. “But the Security Council and Iraq must also fully implement their obligations under
the UN Genocide Convention to prevent, suppress and punish genocide, including by rescuing the
thousands of women and girls still held in captivity. Yazidi women and girls have been waiting for years for the international community to take action on this genocide. This resolution is a long overdue first step to them fulfilling their obligations and upholding the promise of ‘Never Again.’”

Sareta Ashraph, an international legal expert on genocide and gender and lead author of the
Commission of Inquiry on Syria’s 2016 report “They came to destroy” says, “Women and girls are the living victims of this genocide. It is important not to treat the sexual violence crimes against Yazidi women and girls separate from the genocide, as they are an integral part. Daesh has employed all five prohibited acts detailed in the 1948 Genocide Convention.”

Iraq does not have legislation to try war crimes, crimes against humanity and genocide and is not a member to the Rome Statute of the International Criminal Court (ICC). "Current trials and prosecutions of Daesh fighters have been conducted solely under Iraq’s counter-terrorism law and there have been reports of human rights violations," says Benshoof. "Justice and accountability are essential components of post-conflict transition and rebuilding. For these trials to be viewed as legitimate and credible they must be conducted in line with international human rights standards.”

Benshoof adds, “Prosecuting Daesh fighters for terrorism crimes only is like prosecuting Nazis
solely for money laundering and not for war crimes, crimes against humanity or genocide. While you
may meet the desire to put them in jail, you are not holding them accountable for the full range of
crimes they committed and denying victims justice.” Benshoof further warns of one-sided justice:
“Only prosecuting Daesh fighters reeks of victor’s justice. This is a start, but there must be a
more comprehensive mechanism with the mandate to hold all perpetrators of crimes accountable,
including Iraqi, Kurdish and Coalition forces and a resolution which fully acknowledges rape and
other forms of sexual violence as an act of genocide.”