Jive Communications Honored as 2017 Employer of the Year

The Stevie Awards for Great Employers announced Jive and other winners at a September 22 ceremony in New York. 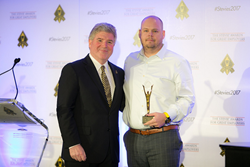 We're thrilled to receive The Stevie Award for Employer of the Year. Our employees mean the world to us.

Jive Communications has been named the Gold Stevie Award winner in Telecommunications at the second annual Stevie Awards for Great Employers. The Stevie Awards recognize the world’s best employers, along with the human resources professionals, teams, achievements, and HR-related products and suppliers who create and maintain great places to work.

“The judges were extremely impressed with the quality of entries we received,” said Michael Gallagher, president and founder of the Stevie Awards. “The dedication to making workplaces great for employees is evident in every finalist nomination.”

This year, the Stevie Awards considered more than 500 nominees, and more than 50 professionals worldwide participated in the judging process to select this year's finalists. Other award winners included Samsung, IBM, McAfee, Cisco, and Wayfair, among others, and an awards gala was held in New York City in their honor.

Paul Thatcher, VP of Human Resources at Jive, said, "We're thrilled to receive The Stevie Award for Employer of the Year. Our employees mean the world to us. They’re the reason we've come so far and made such great strides in the VoIP industry. We have big hopes and plans for the future of Jive and the Jive team."