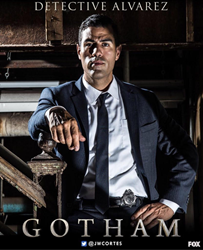 "I am honored to announce my support of the Semper Fi Fund and join my brothers and sisters participating in the 42nd Marine Corps Marathon," Cortes said. "Semper Fidelis means Always Faithful and that sentiment is so much of what makes the Marine Corps such a special & honorable organization."

"I am honored to announce my support of the Semper Fi Fund and join my brothers and sisters participating in the 42nd Marine Corps Marathon," Cortes said. "Semper Fidelis means Always Faithful and that sentiment is so much of what makes the Marine Corps such a special & honorable organization — one that I am proud to have served in. Now I join the Semper Fi Fund to further that service, lending my support to those who have and continue to give so much to us."

The Brooklyn-born Cortes spent nearly 13 years as an active-duty Marine. He served in Operation Enduring Freedom and Operation Iraqi Freedom and attained the rank of Gunnery Sergeant. His citations include the Combat Action Ribbon, Navy & Marine Corps Achievement Medals and Marine of the Year.

“It’s always exciting to hear a Marine Veteran with such a high public profile like J.W. speak out in support of Semper Fi Fund’s critical mission,” says Karen Guenther, president, CEO and founder of the Semper Fi Fund. “Awareness of the issues facing our post-9/11 critically ill, wounded and injured service members and their families, and of the work we do to assist them, is the first big step toward making a difference in the lives of these heroes.”

J.W. will be the guest of honor at the Semper Fi Fund’s annual pasta dinner held prior to the race, a favorite event attended by service members, their families and supporters of the Fund. J.W. plans to share his experiences as a combat veteran and drive home the importance of the sacrifices and commitment those in attendance have made.

J.W. will also run the 10K race, along with over 200 Semper Fi Fund Community Athletes and members of Team Semper Fi, in an effort to help raise awareness and funds for our country’s heroes. And, Cortes will be running the New York City Marathon, November 5 2017, to raise funds and awareness for the Semper Fi Fund.

For press information and to arrange interviews with J.W. Cortes, please contact Brian McPherson, Semper Fi Fund, at brian.mcpherson(at)semperfifund(dot)org or 740-819-9781.

About the Semper Fi Fund
The Semper Fi Fund provides urgently needed resources and lifetime support for combat wounded, critically ill and catastrophically injured members of the U.S. Armed Forces and their families. Case managers from the Semper Fi Fund work one-on-one with service members and veterans in order to understand and support their individual needs right now and throughout their lifetime. We keep our overhead low so our impact on the lives of service members and veterans is greater. The Semper Fi Fund has been awarded the highest ratings from watchdog groups: an A+ from CharityWatch – one of only two veteran nonprofits to receive this rating last year – and six consecutive “4-Star” ratings from Charity Navigator, an achievement attained by only 3% of rated charities.