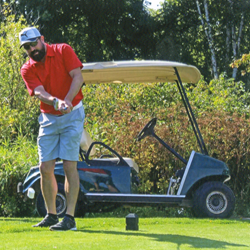 Anyone who knows our story knows that Alzheimer’s is an issue close to our hearts.

“Anyone who knows our story knows that Alzheimer’s is an issue close to our hearts,” said Ryan Novaczyk, New Perspective Senior Living President and CFO. “My grandmother, Betty, fought against this unforgiving disease, and my family’s experience in caring for her was the inspiration behind the founding of our company. Anything we can do to help fight this disease is time and money well spent.”

Founded in 1998, New Perspective Senior Living (NPSL) is a family owned company that develops, owns and operates vibrant senior living communities in Minnesota, North Dakota, Wisconsin and Illinois. Its foundational belief — that all seniors deserve to Live Life on Purpose® and age with dignity — was forged from the personal experience of Founder and CEO Todd Novaczyk and his family. For seven years, they cared for his mother-in-law, Betty Berkeley in their home as she struggled to maintain her strong, independent spirit while coping with Alzheimer’s disease.

Today, New Perspective Senior Living operates 23 senior communities serving over 2,000 seniors through Independent Living, Assisted Living and Memory Care options, with a goal to be serving 10,000 seniors by 2025. Based in Eden Prairie, Minn., the company has won multiple awards including Top Assisted Living Facility, Best-of-the-Best Dining Experience and Top Workplaces. In addition, Todd Novaczk, was recently profiled as an influential industry leader in Senior Housing News, The Leadership Series, while Ryan Novaczyk was just named to 50 for the Next 50 by LeadingAge of Minnesota