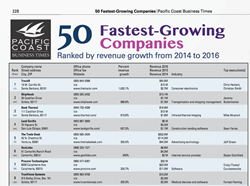 ... this is not only a big win for GeoLinks, but it’s a huge shout out to all of those who have believed in us along the way.

Ranked by revenue growth from 2014-2016, this year’s list highlights GeoLinks alongside other nationally recognized companies such as MindBody, Patagonia, Deckers Brands, Procore, and Sonos. While listed as No. 6 overall, GeoLinks took the No. 1 spot for fastest growing telecommunications company in this year’s round-up.

“This has been a monumental year for GeoLinks,” said GeoLinks’ CEO Skyler Ditchfield. “From officially earning our CLEC and public utility status in May, to rebranding and launching nationally in June, to making the Inc. 5000 list and being appointed to the FCC’s Broadband Deployment Advisory Committee’s Streamlining Federal Siting Working Group in August, I’m excited to say that this is really just the beginning of our projected growth. As a locally founded company, this recognition significantly resonates with the entire GeoLinks’ team. Our first customers were in Ojai and Ventura. The vast majority of our staff lives locally. Our kids go to school throughout the Tri-Counties. Ultimately, we wouldn’t have achieved such accelerated growth without our community’s support. That being said, this is not only a big win for GeoLinks, but it’s a huge shout out to all of those who have believed in us along the way.”

Recording more than 100% growth in annual revenue for the past six consecutive years, and on track for its seventh, GeoLinks’ accelerated success also earned the No. 5 spot on Inc. Magazine’s Inc. 5000 Fastest Growing Telecommunications Company in America released in August of 2017.

The PCBT’s 50 Fastest-Growing Companies will be honored at an evening gala reception hosted at Santa Barbara’s new Moxi Museum on October 19th from 5:30-7:30 p.m.

GeoLinks’ accelerated success is largely due to its flagship product, ClearFiber™, which offers customers fixed wireless on the most resilient and scalable network ever built. From land procurement, to construction, to permitting, and more, GeoLinks does everything in-house, expediting installation periods nationwide. Boasting ultra-low latency, 99.99% uptime, sub 10ms jitter, and a 4-hour max response time, GeoLinks prides itself on delivering the industry’s best Service Level Agreement backed by round-the-clock in-house customer support.