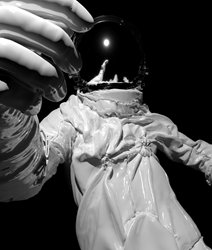 "Marc’s paintings seem real, they ignite memories and familiarity that unsettles but compels the viewer to think about what they are experiencing. His work is profound,” said Philippe Hoerle-Guggenheim, Owner of HG Contemporary Gallery."

Marc’s solo show follows on a long successful career as a technology entrepreneur. Marc built one of the world’s most influential mobile social gaming networks eventually acquired by Blackberry®. Prior to founding the gaming network, Marc earned a PhD in Human Biology. His visionary capacity and deep knowledge of the future and innovation led to his journey as an art maker. Marc leverages 3D software and algorithms also used by movie production companies to create utterly unreal worlds that he paints in large format oil on canvas.

“Marc is establishing a reputation in visual culture by melding his expertise in technology and visual effects to create entirely otherworldly paintings in stunning realistic ways,” said Philippe Hoerle-Guggenheim, Founder & Owner of HG Contemporary Gallery. “Marc’s paintings seem real, they ignite memories and familiarity that unsettles but compels the viewer to think about what they are experiencing. His work is profound.”

“My works question our perception of reality in times where a significant part of our life happens digitally. The paintings figuratively depict a reality that was entirely created on the computer. Now, what is more real: the computer reality or the oil painting? This is the transformation of surrealist René Magritte’s ‘Ceci n’est pas une pipe’ into the digital age.” said Marc Gumpinger.

ARTIST STATEMENT ABOUT PHOTOREALISTIC METHOD
My technique consists of two major areas: one is creating the subjects using algorithms and 3D software on the computer. The other is painting them traditionally in oils on canvas. Both areas have their unique challenges, which I love to solve.
On the computer I have to tweak mathematical algorithms and fiddle with millions of features in bleeding edge 3D visual effects software. When I started working with 3D software 20 years ago there were just a very few software programs you had to deal with. Today there are a ton of special tools you have to employ around the major software packages in order to get the job done.
For the Space series of works, for example, I used software from the textile industry to create and stitch the individual patterns of the astronaut's suit. Then I imported the avatar, its skeleton and motion data I created in another software in order to simulate the suit's folds. After that I imported the suit's polygon mesh into yet another software where I created the materials and light setups. Rendering the final image was done in another tool and obviously there were tons of tools in between to migrate data between the tools.

In contrast to all of that I have to deal with entirely different aspects when painting. Given the high level of naturalism in my paintings one of my major concerns is dealing with drying oil when painting such subtle gradients and details that all blend together. This means mixing the right amount of the right oils with the respective pigments. You can pause a computer, but you can't pause drying oils. While the whole 3D part is bleeding edge, painting in oils I apply the very traditional techniques. I use linen canvas, prime it, mix oil and pigment and paint with brushes.

The bandwidth from going down as deep as working in UNIX shells to moving the oil-loaded brush across the unforgiving canvas is what I love. And given how much technology affects us each and every day I think that this very bandwidth is what is more and more becoming a required skillset for contemporary artists.