Mount Vernon, New York native Alvin Queen was recently notified that U.S. Homeland Security will not allow him to enter the United States to perform at a prestigious, long-planned concert in Washington. 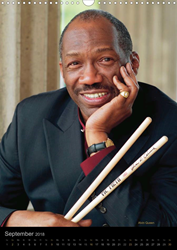 “If someone wants to apologize to me and make this right, fine. But I’m not holding my breath. In the meantime, I’ll bring my music, this American art form, to every other country in the world. I know they like me in Canada. I’ll start there.”

The evening, entitled “JAZZ MEETS FRANCE,” has Wynton Marsalis as its Honorary Chairman, and Dr. David Skorton , Secretary of the Smithsonian Institution , is Master of Ceremonies. The event marks the centenary of the US entry into WWI and specifically honors the Harlem Hellfighters . Ironically, these were the African-American soldiers who served in WWI, and who introduced jazz music to France and the rest of Europe, yet whom were never officially honored, until now.

Mr. Queen, who has held a Swiss passport for thirty years, was informed this week that, due to a run-in with the law as a youth, a half century ago, while a minor, he would have to apply for a Waiver from the U.S. Dept of Homeland Security, despite the fact he was born in the USA. This would take months, making it virtually impossible to participate, barring Presidential decree, and we know that’s unlikely. But this is not “fake news.”

“Sadly, this doesn’t surprise me one bit,” comments Mr. Queen, 67, from his home in Geneva. “I’ve spent months preparing for this concert. Dozens of others are also implicated in its planning. Funny thing, I gave up my U.S. passport to make life simpler at tax time. I never dreamed I would one day be denied entry, and with such ridiculous reasoning. I am frankly disgusted to be disrespected in this way, after a half century devoted to music.”

Mr. Queen, who until 2016 held dual citizenship with the United States and Switzerland, has previously worked numerous times for the US State Department as a Cultural Ambassador, and participated in numerous tours of Brazil, Africa and Japan. Queen also performed at the American International Jazz Day in Paris several years ago.

Mr. Queen has held a U.S. passport, and regularly worked under the auspices of the American government, for over fifty years of his life. Like many citizens, he’s had brushes with the law, but these have never impeded his ability to enter and exit his native country. A one-time DWI charge and a minor drug offense both resulted in not guilty charges.

For this occasion, the US State Dept had only to apply for an “O1B Work Visa” in order for Mr Queen to enter in the United States. This was done correctly, but after the process was completed, fingerprints matching a 1967 FBI file were dredged up and presented as a reason to prevent him from entering the USA. So now we can see that the infamous “travel ban” is not limited to citizens of Sudan, Syria, and Iran. It extends to a then 16-year-old drummer who once sat in with John Coltrane.

How can you process someone fifty years later for charges that occurred when they were a youth, a mere child? And why punish this now acclaimed adult, a leading light on the international jazz scene, who is now 67 years old? He obviously forged a path and created a fabulous life for himself. Adds Queen, “I feel this is more about racial profiling than anything. It’s all about trying to control everyone. I am not a criminal and in fact never was. When I became a Swiss citizen, I “became a criminal” again in the eyes of US law enforcement. If I was undesirable fifty years ago, why have I been issued a fresh passport every ten years for the past six decades?” Indeed, this is the question.

For now, those wanting to experience Alvin Queen’s jazz mastery will need to follow him to Montreal, Canada, where he is set to give a master class with pianist Wray Downes on Fri Nov 3 at 1:00 pm (free and open to the public) at Concordia University and then a full concert with his trio the following evening, at Upstairs Jazz Bar & Grill , on Sat Nov 4, for two sets, at 7:30 and 9:45 pm.

Queen has the last word. “If someone wants to apologize to me and make this right, fine. But I’m not holding my breath. In the meantime, I’ll bring my music, this American art form, to every other country in the world. I know they like me in Canada. I’ll start there.”

This coming week Alvin will be featured on The Jazz Network Worldwide http://www.thejazznetworkworldwide.com with a sneak peek of two singles from his CD re-issues of "Mighty Long Way" and "I Ain't Looking' At You" slated for late fall 2017.

The official website for Alvin Queen is http://www.alvinqueen.com to learn more about his current engagements and all things Alvin.

Mr Queen is available for interviews relating to this story.