The legendary clothing company since 1899, Matchless London, reveals all new leather bomber jacket inspired by Vladimir Putin, President of the Russian Federation. It is the first Matchless fashion product made from hi-tech leather, which resists extreme cold weather, up to minus 40 degrees Celsius. 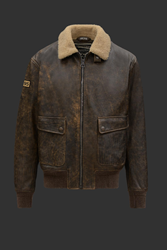 Putin Jacket is the first Matchless fashion product made from hi-tech leather for 2018 fashion season, which resists extreme cold weather, up to minus 40 degrees Celsius.

The legendary clothing company since 1899, Matchless London, reveals all new leather bomber jacket inspired by Vladimir Putin, President of the Russian Federation. It is the first Matchless fashion product made from hi-tech leather for 2018 fashion season, which resists extreme cold weather, up to minus 40 degrees Celsius.

‘Matchless London is famous for its luxury jackets inspired by real and fictions super heroes - from Marlon Brando to Arnold Schwarzenegger and from Batman to James Bond,’ says Manuele Malenotti, the managing director of Matchless London, ’We consider Russian President Vladimir Putin a modern super hero as well, giving personal respect to his strong character, brutal image, sense of humour and calmness as a world leader. In his 65 Putin rides horses and motorcycles, playing ice hockey and practicing judo, as we can follow in the media. This is not the usual routine even for much younger leaders. And yes, he runs Russia, the global super powerhouse.’

The Putin Jacket is introduced to mark Vladimir Putin’s 65th birthday, on the 7th of October. This jacket is the first product in the fashion capsule of innovative Matchless outerwear inspired by President of Russia. The future Putin inspired line will include parka, coat and other jackets from wax cotton and high performance leather. The whole range of Putin Jackets will be showcased in January 2018 in 2018/2019 collection of Matchless London. All Putin Jackets will bear the number 6595 on the sleeve.

’We were looking for some creative identification of this special Matchless jacket dedicated to President Putin,’ says Manuele Malenotti, ’The DNA of our brand is motorcycles. It is all about road and distance. Russia is the longest country on Earth. We decided to measure the distance between the westernmost point of Russia that is near Kaliningrad at Russian-Polish border, and easternmost point of Russia that is Naukan on Bering Strait facing Alaska. Google map counted 6595 kilometres between these two points. Surprisingly figure 6595 also refers to 65th anniversary of the Russian President. Putin Jacket is good enough if you try to cover this distance on a motorcycle.’

Putin Jacket will be available for pre-order at http://www.matchlesslondon.com starting December 2017. It will also be available starting February 2018 in Matchless flagship store in London, located at 31/33 Cork St in Mayfair, and in selected boutiques around the world. The retail price of this limited edition jacket is GBP 1,299 (EUR 1,499 or USD 1,699).

Matchless London is the iconic British fashion brand of outerwear clothing and accessories from high performance materials. The company started in 1899 as a first manufacturer of motorcycles in Great Britain. Matchless was the first motorcycle brand that launched own clothing line for bikers. It became very popular in 1920-30s because of famous Matchless ads promoting elegant looks and style. The second life of Matchless started in 2012 when the trademark was acquired by Franco Malenotti, the former champion of Italian superbike series and the man behind Belstaff fashion brand. Along with launching the luxury fashion line of Matchless London, in 2014 Malenotti family has introduced the 115th Matchless anniversary version of classical Matchless Model X bike - Model X Reloaded, designed by Franco Malenotti and the team with respect to the spirit and tradition of Matchless. The original Model X was produced over 80 years ago, and its return in high-end version became the most anticipated event in the world of motorcycles.

In fashion Matchless London reinvented the heritage Kensington and Osbourne jackets, originally worn by iconic figures such as Marlon Brando and James Dean. Today Matchless could be found in the wardrobes of public figures such as His Holiness Pope Francis, Bill Clinton, and top celebrities such as Dwayne Johnson, Gerald Butler, Tom Hardy, Daniel Craig. Matchless became the jackets of choice for key blockbuster productions such as James Bond Spectre, Star Wars, The Expendables 3, Avengers 2, Batman vs Superman, etc. Matchless London produces the fashion capsule of outerwear inspired by Arnold Schwarzenegger.